President Shimon Peres held a dinner marking the Arab holy month of Ramadan at his residence in Jerusalem Sunday evening, inviting Egypt's deputy ambassador to participate amid threats the country would withdraw its ambassador from Israel.

At the end of the festive meal, which also took place amid rocket fire from Gaza on southern Israel, Peres addressed the diplomat, Mustafa al-Kuni, saying he hoped Egypt would "be liberated and know economic prosperity". Al-Kuni refused an offer to speak.

The president also expressed hope for a ceasefire with Gaza's terror groups. "I don’t see any reason for anyone to want a war," Peres told leaders of the Arab sector, foreign diplomats, Knesset members, and regional council heads in attendance. 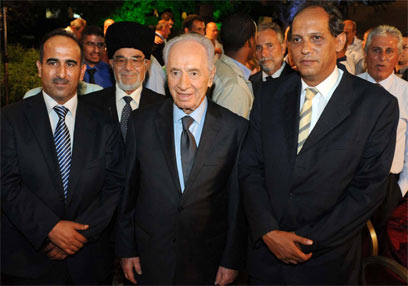 "I cannot say we are not all concerned over the incidents of the past few days," Peres said, stressing the need for sustaining peace with Egypt and Jordan.

"I remember the signing of both agreements, with Egypt and Jordan, and the slogan back then was very simple – No more war, no more bloodshed," he added. "We have had seven wars, in all of which we lost. We lost good children – boys and girls. We don't want this anymore. Why should we have more wars, more conflict?" Peres said Israel has great respect for the Egyptian and Jordanian people, as well as the Palestinian Authority. "We have invested so much money in wars which we could have invested in our children. We cannot fix the past, but we can fix the future. There are differences of religion between us, but there is no reason there should be hatred. We are all children of Abraham and all of us pray to one God," he explained. Tensions peaked between Cairo and Jerusalem over the weekend when Egypt demanded Israel apologize for the deaths of six members of its armed forces in exchanges of fire with terrorists who murdered eight Israelis in the south. Defense Minister Ehud Barak expressed "regret" for the deaths, after which Egypt, though expressing dissatisfaction with the demonstration, largely refrained from renewing its threats.