Obama to Gaddafi: You no longer control Libya

WASHINGTON - US President Barack Obama issued a statement Monday calling Libyan leader Muammar Gaddafi to recognize he has lost control over Libya. Obama addressed the rebels' takeover of Tripoli and said in a statement, "The Gaddafi regime has reached a tipping point. Tripoli is slipping from the grasp of a tyrant. The Gaddafi regime is showing signs of collapsing."

The US president stated that Washington has recognized the Transitional National Council as Libya's legitimate governing authority and urged it to pursue a transition to democracy that will include all of the people of Libya. "At this pivotal and historic time, the TNC should continue to demonstrate the leadership that is necessary to steer the country through a transition by respecting the rights of the people of Libya, avoiding civilian casualties, protecting the institutions of the Libyan state and pursuing a transition to democracy," he said.

Currently on holiday at Martha's Vineyard, Obama is being briefed around the clock on the situation in Libya and has held consultations with National Security Council officials on the matter. He also discussed the situation with reporters. 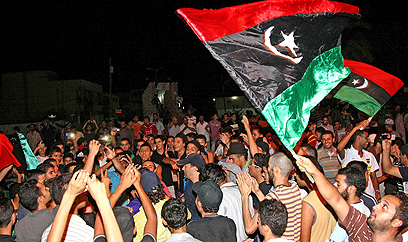 Libyans celebrate on streets of Tripoli (Photo: AFP)
The president stressed that the surest way to end bloodshed was for "Muammar Gaddafi and his regime to recognize that their rule has come to an end. "Gaddafi needs to acknowledge the reality that he no longer controls Libya," he said. "He needs to relinquish power once and for all."

Obama further added: "The future of Libya is now in the hands of the Libyan people. Going forward, the United States will continue to stay in close coordination with the TNC.

"We will continue to insist that the basic rights of the Libyan people are respected. And we will continue to work with our allies and partners in the international community to protect the people of Libya, and to support a peaceful transition to democracy."