Also Monday, an official who was involved in mediating talks between Israel and Palestinian factions in Gaza told Reuters that the groups had "reached an understanding on a truce and that the truce has started".

A Palestinian official said Hamas had agreed to enforce the ceasefire on smaller militant groups which were responsible for most of the rockets fired at Israel in the recent surge in violence. 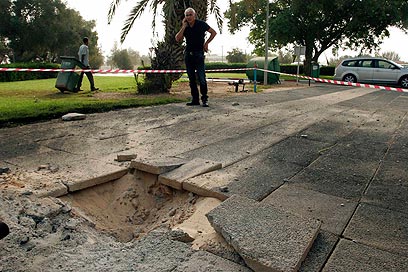 Rocket hits Eshkol Regional Council (Photo: Eliad Levy)
Meanwhile, the Political-Security Cabinet stressed that the ceasefire had been unilaterally declared by the Palestinians and that Israel was not involved in the decision.

The cabinet ministers discussed the security situation well into the night on Sunday. They decided that Israel will act against the rocket launchers and other parties involved in the rocket attacks.

A rocket fired Monday morning from the Gaza Strip landed near a public building in the Eshkol Regional Council. There were no injuries but the building suffered structural damages.

At around 1:20 am an air raid siren roused Ashkelon residents as a rocket was fired from Gaza. The Iron Dome system intercepted the rocket with residents reporting shrapnel falling on buildings in the city.

Earlier, two more rockets were fired from Gaza at southern Israel. The Qassams landed in the Sderot area, causing no injuries or damages.

On Sunday night, an IDF force detected suspicious figures near an army base in the Egyptian border area and fired in the air.

The defense establishment believes the IDF's activities in response to the terror attack, including a number of air strikes in the Gaza Strip, sent terror groups a strong message.

In a situation when neither side is interested in escalation – it would seem that both sides were aiming for a ceasefire - Israeli representatives were in Cairo Sunday for talks on the recent escalating violence.