Protestors: Tents are here to stay

Escalation in south may have taken wind out of social protest's sails, but with promises of calm ahead, protest leaders claim 'we're on marathon not sprint'

The relative calm after days of escalating violence in the south has leaders of Israel's socio-economic protests hoping that their cause will once again become the main public agenda.

The weariness spreading through the many protest tents and estimates of the protest's demise are null and void. "We're here to stay, the struggle is a marathon not a sprint," the protestors told Ynet adding that Israel's southern residents have their complete support.

The Beersheba protest tent site was empty Sunday night as its occupants exchanged tents for the nearby bomb shelters in accordance with Home Front Command directives. One tent was moved into the fortified space in order to keep the spirit of the protests alive.

The Beersheba protestors showed their support for local police and security forces and stressed that until things were back to normal they would refrain from engaging in activities that require police escorts.

"At the moment they are focusing on other things but the minute this whole thing (escalation) is over, it's back to business as usual. The protest is not over, but we believe that it is irresponsible to continue the protest in this situation. 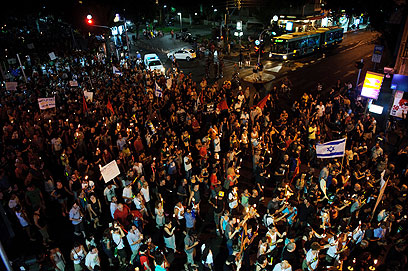 Last week's 'silent march' (Photo: Ben Kelmer)
"We are not detached from the current reality or the needs and preparedness demanded of the security forces," they stressed.

Daphni Leef, one of the leaders of the housing protest, declared that she was "here to stay."

"The urgency of the protest has been made even clearer by the security situation," Leef told Ynet as she made her way to Beersheba.

"There isn't anyone who doesn't want this protest to succeed or who thinks it isn't important. Many tent dwellers feel they have become a national social network that connects the Israeli population. Now is the time to make sure things progress." Among the protestors' planned events are rallies as well as a mass protest march in September which they hope will attract over a million participants. "Now that thousands of Israelis know they can lead and command change from their government, the protest will not be able to fade," noted National Student Union Chairman Itzik Shmuli. The number of visitors to the protest tents has dwindled, most likely due to the combination of security concerns and preparations for the new school year.

And in spite of their declarations it would seem that some of the tent dwellers are growing weary. But most of them stress "the carnival atmosphere has been replaced with a serious debate over the next stage of the struggle."

Meanwhile, Professor Manuel Trachtenberg, who heads the social team appointed by Prime Minister Benjamin Netanyahu to deal with the protesters' demands, announced that increasing the state budget is out of the question. He claimed that in order to finance housing and education reforms, other ministries' budgets will have to be cut.

"What we need today is a real change in the state's priorities," Trachtenberg said in a Youtube video.

Trachtenberg added that while there is no easier solution for the government than to increase spending in order to quell the unrest, "we need a real change, and such a change can only be reached if we establish rigid limits."