Thomas P. turned his Hamburg apartment into a torture den, where according to suspicion he planned to hold captive and abuse an Israeli woman that he met several months earlier.

German media reports claimed Monday that the Hamburg man turned his apartment into a "prison" by blocking the windows and balcony with an elaborate web of barbwire, and insulating the walls so that no one would be able to hear his victims screaming for help. According to reports, the police even uncovered a stash of food that would last for up to a month. During the weekend, the suspect carried out his plan and kidnapped the 26-year-old Israeli woman at gunpoint. Fortunately, a moment of inattentiveness saved her, and she managed to escape the apartment and report the incident to the police. 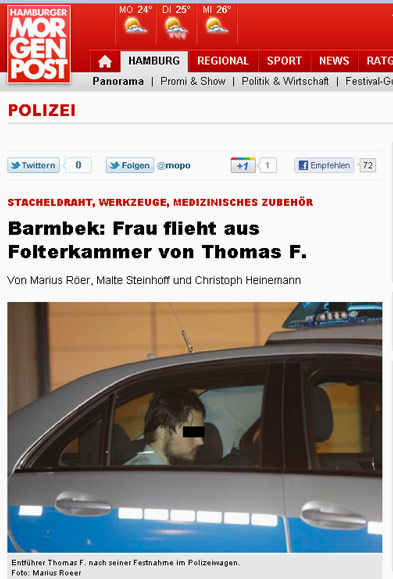 Suspect Thomas P. arrested by police
The suspect, 30, was arrested shortly after. His criminal record includes past convictions of sexual offences, harassment and fraud. The police did not say whether the woman's Israeli background had any connection to the kidnapping.

The Israeli Embassy stated that it was looking into the reports.

A police spokesman said that the woman's action showed great courage: "She was able to somehow move the barbwire around and escape though one of the windows. That could not have been easy."

In a search conducted in the suspect's apartment after his arrest, the police found explosives. The building had to be evacuated twice – as more than one explosive stash was found – and a police source described the amount of explosives found as "potentially devastating."

The police added that the suspect was not cooperating and the he faces abduction charges, as well as weapon offenses. 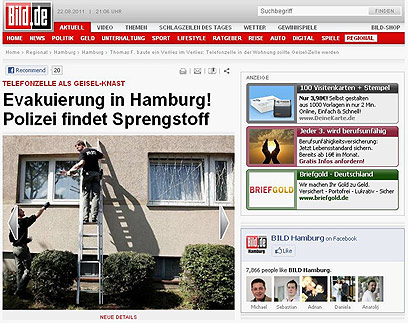 Barbwire on the windows (Screenshot)

A Hamburg based paper reported that the suspect met the woman last May, and that he planned to kidnap and hold her in his apartment, located in the city's Barmbek neighborhood.

According to the report, the suspect grabbed the woman last Friday, handcuffed and threatened her with a gun, and then took her to his apartment.

Neighbors told Dewalt newspaper that the suspect told them he was protecting his apartment from burglars. "We believed him, how could we have guessed his sick plan?" one of the neighbors said.

His plan, however, was foiled by the young woman, who managed to jump out of the apartment when her capturer was not paying attention. The suspect tried to chase the woman, who escaped to a friend's apartment and called the police.

The suspect was arrested upon returning to his apartment. According to reports he was armed with a gun, but did not confront the police officers. He refused to give any details during the investigation, and has hired a lawyer.

According to media reports, an initial investigation revealed that the suspect was planning to impregnate the woman. The police's suspicion was based on gynecological instruments found in the apartment.

The suspect's father told Bild newspaper that his son never worked, and had not visited the family in eight years. The father said they had kept in touch only through occasional phone calls and Christmas cards.

The father also said his son had financial problems and that he had helped him pay his rent..