Obama: Gaddafi regime at its end

Addressing rebels' claims that they have seized control of Tripoli, US president says Gaddafi must realize he no longer controls Libya, urges rebels to lead transition to democracy

WASHINGTON – US President Barack Obama addressed the dramatic developments in Libya on Monday, recognizing the rebel political body as the country's legitimate government and stressing that  Muammar Gaddafi's regime has effectively reached its end.

"Tonight, the momentum against the Gaddafi regime has reached a tipping point," Obama said in a statement. "The Gaddafi regime is showing signs of collapsing. The people of Libya are showing that the universal pursuit of dignity and freedom is far stronger than the iron fist of a dictator.

"Gaddafi needs to acknowledge the reality that he no longer controls Libya," he added.

Obama said the US has recognized the rebels' "Transitional National Council as the legitimate governing authority in Libya," and urged the TNC to "steer the country through a transition by respecting the rights of the people of Libya, avoiding civilian casualties, protecting the institutions of the Libyan state, and pursuing a transition to democracy."

He pledged to send the critical supplies to deal with the "humanitarian impact" of the Gaddafi regime's violent actions.

“The United States will be a friend and a partner," he said. "We will join with allies and partners to continue the work of safeguarding the people of Libya." 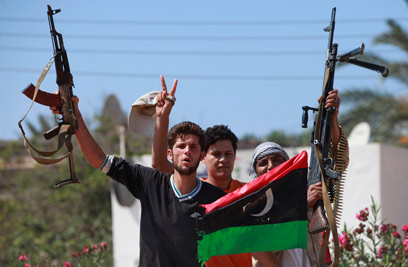 Earlier Monday, rebel forces claimed to be in control of most of Tripoli after their swift advance on the capital heralded the fall of Gaddafi's 42-year-old regime. But they still faced some fierce resistance, with scattered gun battles erupting.

“The situation is still very fluid, there remains a degree of uncertainty, and there are still regime elements who pose a threat," Obama said of the continued fighting. “But this much is clear, the Gaddafi regime is coming to an end and the future of Libya is in the hands of its people.”

The whereabouts of the leader were still unknown, but White House and Pentagon officials said they believe he is still in the country.

Assistant Secretary of State Department Jeffrey Feltman acknowledged in an interview from Cairo Monday morning that US officials do not know where Gaddafi is. White House spokesman Josh Earnest, echoing the Pentagon, told reporters "there's no evidence to think he has left."

Obama urged the embattled leader to “reduce further bloodshed by explicitly relinquishing power to the people of Libya and calling for those forces that continue to fight to lay down their arms for the sake of Libya." 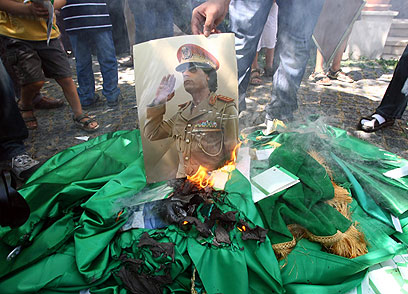 UN Secretary-General Ban Ki-moon echoed the US president's statements, and urged forces loyal to the Libyan leader to stop fighting immediately and make way for "a smooth transition" that ensures a free and democratic future for the country.

The UN chief said that it was important that the conflict ends with no further loss of life and without retribution. He did not specifically call for Gadhafi to step down.

Ban welcomed assurances from rebel leader Mustafa Abdel-Jalil that "extreme care" will be taken to protect civilians and public institutions, and maintain law and order.

Ban announced that he will hold a meeting on Libya later this week with heads of major organizations, including the Arab League, African Union, Organization of Islamic Cooperation and European Union.

The AP contributed to the report