Despite a psychiatrist opinion deeming him unfit to stand trial, Asher Dahan, who is suspected of killing Rabbi Elazar Abuchatzeira, was indicted for murder on Tuesday.

According to the indictment, Abuchatzeira's murder was premeditated and fueled by Dahan's dissatisfaction with the victim's marital advice. 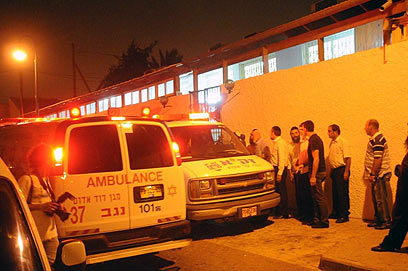 Scene of murder (Photo: Herzel Yosef)
Two weeks after the Northern District's chief psychiatrist declared Dahan unfit for trial, the Southern District Prosecutor filed an indictment with the Beersheba District Court, and also submitted a motion for a second opinion on the suspect's psychiatric condition. 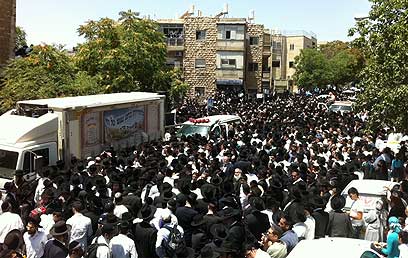 Rabbi Abuchatzeira's funeral (Photo: Noam Moskovich
According to the indictment, Dahan was among Rabbi Abuchatzeira's followers for many years, and occasionally sought his advice on different matters. When Dahan wanted to divorce his wife because he suspected she was cheating on him, the rabbi advised him to stay in his marriage. Dahan apparently did not appreciate the advice.

It is suspected that Dahan thought Abuchatzeira's advice was motivated by greed, and decided to kill him. He hid a knife in his tefillin and went to the rabbi's office, where he stabbed him in the chest.

Abuchatzeira was treated on the scene by Magen David Adom emergency services, but was pronounced dead on the way to the hospital.

The rabbi's disciples caught 42-year-old Dahan and handed him to the police. During his investigation, it was revealed that he planned the murder in advance because he was unhappy with the marital advice he received from the rabbi.