Triumphant rebels seized Muammar Gaddafi's compound in Tripoli on Tuesday after a fierce battle with a loyalist rearguard but there was no word on the fate of the Libyan leader who vowed again to fight "to the end". Hundreds of Libyan rebels stormed Gaddafi's main military compound in Bab al-Aziziya, firing shots into the air from within the compound in celebration.

In what will probably become one of the Libyan revolution's most memorable images, the rebels toppled the famous golden statue stationed just outside Gaddafi's palace, depicting a left-handed fist crushing a US fighter jet.

Opposition fighters poured into the area by the hundreds, swarming around Gadhafi's former residence; and several rebels, in a show of contempt for the man who ruled the North African nation for more than 40 years, placed a head seized from another statue under their feet and kicked it.

Neither Gaddafi nor members of his immediate family were found in the compound when it was breached by the rebels, but the ferocity of the battle led many to speculate that the maverick leader may have been inside. As of Tuesday night, Gaddafi's whereabouts are unknown.

Rebel National Transitional Council spokesman Ahmed Bani said that the NTC will move its headquarters to Tripoli within two days. 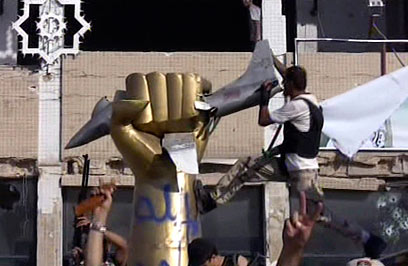 Earlier reports suggested that NATO jets bombed the compound in support of the rebels. His son and presumed heir Saif al-Islam had earlier told a crowd that his father was well and still in Tripoli. NATO declined comment on whether it had struck Bab al-Aziziya.

"The revolutionaries are trying to get in through the Old Gate on the western side," rebel fighter Muftah Ahmad Othman told Al-Arabiya television from Tripoli. "If they're successful, the fighting will move inside the compound."

Libya's former deputy ambassador to the UN Ibrahim Dabbashi said he expected the entire country would be "totally liberated" and in rebel hands within 72 hours.

Western powers, backing the disparate opposition to Gaddafi, moved ahead with plans to support a new administration with which they hope to exploit Libya's oil wealth. They renewed calls for the 69-year-old autocrat to surrender.

But few analysts or observers in Tripoli credit Gaddafi's core of supporters with much chance of holding out for long.

"It is not an outright victory at this stage," conceded French Defence Minister Gerard Longuet. But he added: "The Gaddafi regime is isolated, surrounded and against the wall." 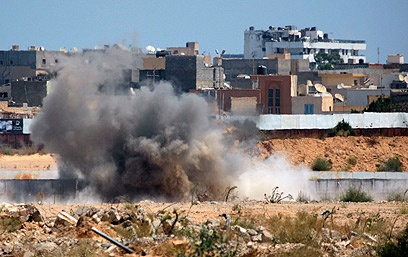 The lack of clear control, however, has revived concerns the sprawling, thinly populated desert state could fall into the kind of instability that has beset Iraq since Saddam Hussein's overthrow. Gaddafi loyalists and anti-Western Islamists could exploit Libya's ethnic, tribal and political divisions.

Rebel officials said they have a force ready to impose order in the capital, as they have generally done in parts of the country they have taken during the six-month-old civil war. But it is not yet clear how they will handle traditional east-west divisions if they consolidate their grip on the country.

The uncharacteristically efficient rebel advance into the capital, coordinated with an uprising inside the city, seemed evidence to some analysts of the military advice and training Western and some Arab powers, including Qatar, have provided. Many assume special forces are also active on the ground. 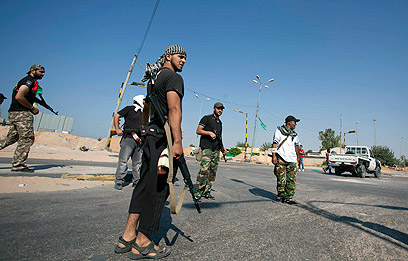 US President Obama said on Monday that the conflict was not over yet, and cautioned rebels against exacting revenge: "True justice will not come from reprisals and violence," he said.

The president also made plain that the United States would oppose any group within the loose coalition of rebels from imposing its power over other parts of Libyan society. "Above all we will call for an inclusive transition that leads to a democratic Libya," Obama said. In an audio broadcast on Sunday before state TV went off the air, Gaddafi said he would stay in Tripoli "until the end". There has been speculation, however, he might seek refuge in his home region around Sirte, or abroad. In a sign some of his allies were determined to fight on, NATO said government forces fired three Scud-type missiles from the area of Sirte towards the rebel-held city of Misrata.

Rebels clashed with an army convoy coming from Sirte, killing dozens of Gaddafi's troops on Tuesday, Al-Arabiya TV reported. It did not say where the clash took place. NATO bombed Sirte heavily just before rebels moved into Tripoli.