Iranian President Mahmoud Ahmadinejad called the Damascus regime to engage in dialogue with the Syrian people in order to put a stop to the violence and reach an understanding regarding the political reforms in the country, Lebanese Al-Manar television reported on Thrusday. "The people and government of Syria must come together to reach an understanding," he told the station, which is run by the Iranian and Syrian-backed Hezbollah movement. 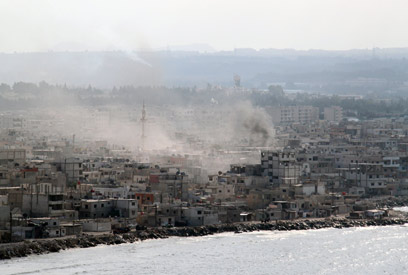 Syrians under fire (Photo: AFP)
"When there is a problem between the people and their leaders they must sit down together to reach a solution, away from violence," he said. "One must not kill the other." Despite these declarations, Ahmadinejad conveyed a different message back in 2009, when thousands of Iranians took to the streets to protest against his re-election. YouTube videos appeared online, showing the regime's militia firing at the masses, killing dozens and injuring thousands. 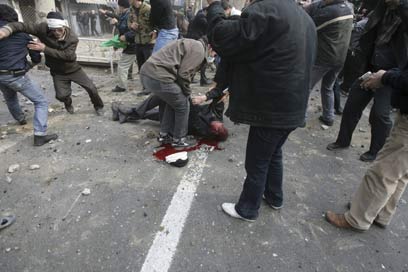 The Iranian president linked between NATO's assistance to the Libyan upheaval and the Syrian situation. He claimed the West seeks to attack Syria just as they intervened in Libya, therefore concluding that the people of Syria and its government must come to an understanding soon.

Ahmadinejad added that the West was not interested in reforms, but only wishes to encourage a national conflict.

"We need freedom, justice and free elections," Ahmadinejad declared, adding that the people of Syria have a right to demand these privilages while setting a clear timeline. He further inferred that all of the tragedies of "its people" result from Western intervention in favor of "the Zionist entity."