Jerusalem's walls restored, idiosyncrasies and all

The $5 million undertaking, which began in 2007, is set to be complete by the end of this year. The first restoration of the walls in nearly a century

Israeli experts are nearing completion of an ambitious restoration of the five-century-old walls of Jerusalem, the holy city's dominant architectural feature and a unique record of its eventful and troubled history.

The $5 million undertaking, which began in 2007, is set to be complete by the end of this year. The first restoration of the walls in nearly a century, it has required decisions about which of the walls' many idiosyncrasies - the falcon nests, for example, the hundreds of machine-gun bullets, the botched restorations of years past - are flaws to be corrected, and which have earned a place in Jerusalem's story and are thus worth preserving.

Jerusalem's stone walls are 2- 1/2 miles (4 kilometers) in length. They include seven gates.

"On these walls you see the whole history of this city," said Avi Mashiah, the Israel Antiquities Authority architect in charge of the project. "They are like a mirror, reflecting all of the periods that the city experienced, and there are many. There are no other cities like this one." 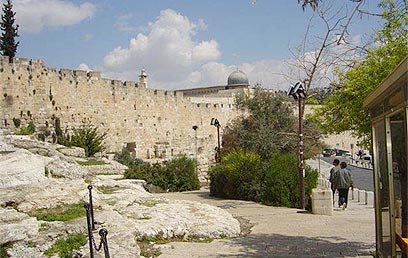 A disintegrating protective barrier of cinderblocks erected on top of the existing wall by Jordanian troops about 50 years ago, for example, was dismantled. Then it was recreated to serve as a reminder of the divided city that existed before Jordan lost east Jerusalem to Israel in the 1967 Mideast war.

Bullets pancaked into the stones at Zion Gate - remnants of fierce fighting there in 1948, when Israeli forces lost the Jewish Quarter to the Jordanians - were left in place.

Hundreds of almond trees that grow inside the walls, however, were removed. Their roots, extending between the Ottoman stones, damage the wall.

Israeli archaeology and other work in east Jerusalem has often been contentious, because it implicitly asserts Israel's ownership over a part of the city where Palestinian leaders hope to establish a capital. But there has been little opposition to this restoration, and at Damascus Gate merchants seemed pleased that centuries of grime had been removed and the gate restored to something of its former glory.

"It was old, and they renewed it all," said Asad Asmar, who runs a stand outside the gate. "Up there," he said, pointing to Suleiman's ornate battlements, which had gone from a dirty gray to a light beige that caught the light, "everything is new. It's very, very good."

The Old City walls, completed by Sultan Suleiman the Magnificent in 1541, are a monument to Ottoman engineering and to centuries of Islamic rule over Jerusalem.

Suleiman, it seems, was moved to construct the walls in part because he feared a new Christian Crusade to wrest the city from Islamic control.

For convenience, he based his walls in large part on existing ancient fortifications, including some from Roman times. His engineers constructed 35 watchtowers, firing slits for archers and grates from which burning oil could be poured on invaders rushing the gates.

His workers often reused stones that they found around the city. One, still visible near Jaffa Gate, bears the worn inscription "LEG X" - a remnant of an encampment of the 10th Legion, the Roman unit that put down a Jewish revolt and destroyed the temple in Jerusalem in 70 A.D.

The carved lions that gave Lions Gate its name were leftovers from the 13th-century Mamluk warrior Sultan Baibars. The ornamental carvings set in an outer wall near Jaffa Gate were the work of Crusader masons.

The new crusade that Suleiman feared did not materialize, and Christian conquerors only arrived nearly four centuries later in the form of the British general Edmund Allenby. Entering Suleiman's walls after receiving the Turkish surrender in 1917, Allenby famously dismounted and strode through Jaffa Gate on foot in a gesture of humility.

The walls were unharmed, and went on to survive the Arab-Israeli wars of 1948 and 1967.

The new restoration began after several stones fell into the yard of a Catholic school adjacent to the wall in 2006. The Israeli government allocated funding and work began the following year.

At the grandest of the Old City's seven entrances, Damascus Gate, crews worked for ten months repairing and cleaning the stones. Inside the gate, Palestinian vendors change money and sell watches and colorful dresses hung on the massive Turkish iron doors, and much of the work was carried out at night so as not to interfere with business.

Inside the gate, one blackened stone on which no detail had been visible turned out to have a geometric inscription in block-like Arabic letters reading, "There is no God but Allah, and Muhammad is Allah's messenger."

The workers recreated the gate's "crown," the teeth-like battlements jutting upward above the entrance, which had been shot to pieces during the fighting in 1967. Its restoration was completed last week.

Ornamental stone spikes of the wrong shape placed atop the battlements by the British during the last restoration, in 1920, were removed. They were replaced with handmade copies of the original Ottoman stones, made by a Palestinian stonemason from a West Bank village.

During the project, a team also scanned the entire length of the walls with 3-D laser equipment, mapping every stone and locating dangerous bulges.

The crew noted the places where caper bushes and almond trees were growing between the stones, as well as the dozens of falcons and common swifts that nested in the walls.

The crevices were left untouched to avoid disturbing the birds.