'God told us to come' - Glenn Beck's show in Jerusalem

God provided the lighting and the décor, and the American commentator provided the goods – a sense of joining a struggle to save the besieged holy city from the forces of darkness. The "Kosher Tea Party" members were there alongside hundreds who feel at home in Israel and swear with Beck in Hebrew: "Lo Ira!"

"Yes ma'am, it's right after the protestors to your right," the young American security guard said as he directed me towards Glenn Beck's "Restoring Courage" rally in Jerusalem.

His accent immediately pulled me away from the masses of haredi families making their way to the Western Wall, to the sterile environment of a well-planned and polished American-style ceremony held at the very heart of this crazy city. He said "protestors" so I obviously came to the right place.

A young woman ordered me to "smile!" upon my entrance. Her shirt had the inscription "Love for the IDF". I promised her to do my best to smile, which was rather easy as I was greeted with white flowers, t-shirts with the inscription "Kosher Tea for Israel Tour" and above all the happy, welcoming crowd on a spiritual high. 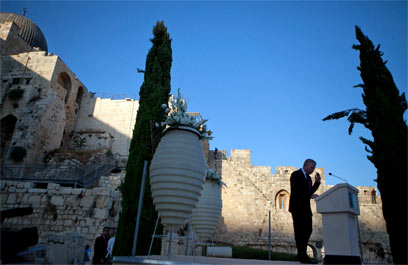 There is no doubt that the man that generated so much criticism from hundreds of American rabbis from all streams of Judaism was supposed to look like and sound like nothing less than a prophet.

The podium was set up so that the al-Aqsa Mosque would be seen from above. The soft light that descended on the Jerusalem stones intensified the light of truth of which Beck speaks of – that the world must stand resolutely with Israel and the Jewish people to whom it was given by God. 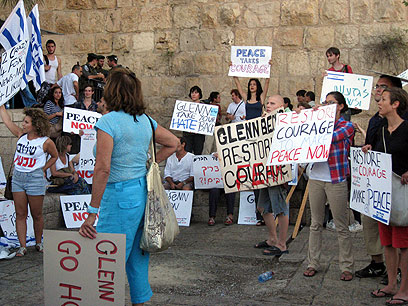 Beck cries out "Lo Ira" (Hebrew for "I shall not fear"). He explains that these words were spoken by every Jew as he endured hardships throughout history – from the bible, through the Holocaust to the present day. He asks his followers to join an international movement he is about to establish and speaks of the obstacles ahead. "The last threat on my life took place about five minutes ago," he proclaims.

I doubt it as I look around and notice the heavy security presence. But his thundering voice takes over my cynical thoughts. "Lo Ira!"

"I will stand with Israel. I will stand with the Jewish people. And if they want to round us up again," Beck says alluding to the Holocaust, "I will proudly raise my hand and say “Take me first.” Standing ovation. 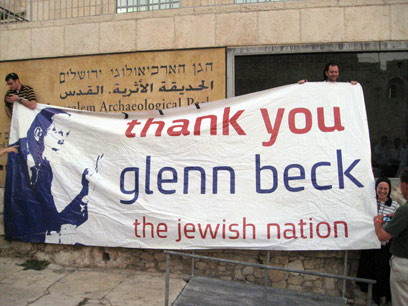 "Many of us may fall along the way," he says. "Some will have their reputation destroyed or business or career ended and others still may pay the ultimate price", which makes me wonder how many people in the US will actually lose their jobs because of their support of Israel?

"Stand strong and say: Lo Ira!" A young woman wearing a pink head cover is tearful as Beck talks about how in every generation the Jewish people faced the threat of annihilation. Behind her, another tearing blonde woman. Even her husband was spotted with tears in his eyes.

There are quite a few empty seats, several hundred followers, not only Christians and almost a similar number of journalists and crew members. Everyone has a badge. Security personnel clear the way for elegantly dressed people carrying a "Talent" badge. I removed my press badge at the entrance, right about when Beck started to slam the media – the prophet of deception.

In the crowd, I noticed black shirts with the inscription "Kosher Tea Israel Tour". A man wearing one and his friend who had a yarmulke explain that they wish to bring to Israel the goals of the American Tea Party, the values of a free economy, a small government and a responsible monetary policy." 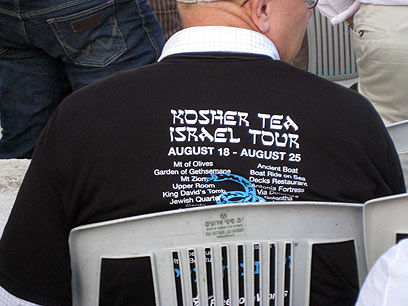 Other shirts in the crowd yelled out "JerUSAlem". The two women who wore them, from Michigan and Florida, explained why they had come to Israel: "When we arrived, the first thing that our guide said was 'Welcome home' and it struck me how true that was. I have a home in America and in Israel."

"We came here because Beck said that we should stand with Israel. Then we felt that it was what God wanted us to do. We are here to express our support and pray for peace. Touring your beautiful country is just a bonus," they explain. They were in Jerusalem and the Sea of Galilee but not in the secular Tel Aviv. 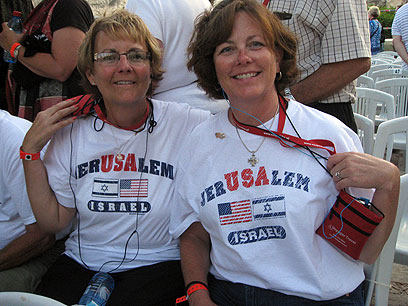 On my way out, I meet a young man who came to Israel with his family and wants to be a journalist. I ask him what he thinks of Beck. "I believe that the more drastic the positions, the closer they are to the truth. The world is a bad place, full of crazy people. It's not pretty like CNN are trying to show, in my opinion."

These rather simplistic perceptions, which clearly define the world in a one-dimensional sphere, are probably what make Beck so successful.

Outside I meet young members of the "Fighters of Zion" wrapped in Israeli flags. They define themselves as a "right wing, Zionist organization that seeks to counter the far left and anarchist groups, and anyone who harms the IDF and questions Israel's legitimacy." 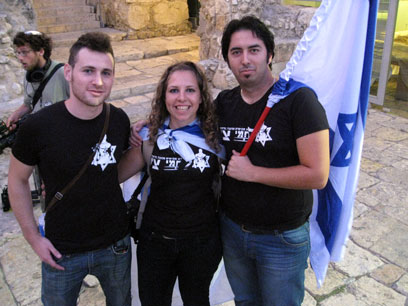 They couldn’t really explain what were the right wing positions they adhere to but stressed that I not describe them as right wing extremists. They came to the event to thank those who support Israel. They didn’t enter only waited outside to pay their gratitude.

I went back for one last look at the beautiful archeological garden. Perhaps the critics are right in saying that Beck is using Israel to revive his career, but it seems to me that the man truly believes in what he says. I also want to believe. After all, I also stand by Israel and the Jewish People, my heart also quivers at the last light of day on the wall.

Sudden noises interrupted my thought – it was the crew, who began packing up just as above us the sound of the Muezzin calling for prayer was heard.