As the situation in the South escalates and the Palestinians prepare for their statehood bid in the United Nations next month, the Knesset has been busy arguing over a report criticizing Israel's readiness for this upcoming September.

The report, initiated by the Knesset's Foreign Affairs and Defense Committee (FADC) Chairman Shaul Mofaz (Kadima), is set to be publicized on Sunday. However coalition members have been hard at work to try and prevent its publication.

In the report, it is allegedly stated that Israel is ill-prepared for possible scenarios in September. It also mentions that the Palestinian bid could have been prevented in the diplomatic arena.

However, FADC members belonging to the coalition claimed Mofaz wishes to use the document as a political weapon with which to attack the government, inflicting a heavy blow to Israel's image. 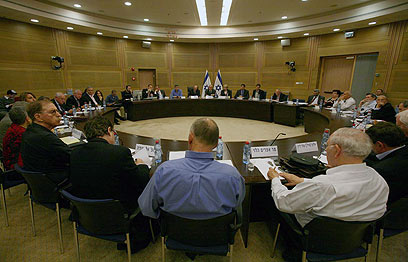 Mofaz denied such claimes. "The attempt of some to say this is a political report is at best a case of misunderstanding and at worst – irresponsible. September is already here, and burying your head in the sand won't help the State of Israel, its security or the security of its citizens," insisted Mofaz.

The members discussed the objections raised against the publication of the report, claiming some of the information presented in it would cause great damage if it becomes public knowledge, despite the fact that it is not classified information.

Participants told Mofaz to remove all of the potentially harmful information, but he insisted that most of it has already been published in the media and discussed by the committee. In response, Frankel-Shor said that the report also includes findings, recommendations and conclusions, aside from protocols. The members then agreed that the FADC will have to vote on it and approve the report's final conclusions, prior to it being deemed an official committee document. However sources close to Mofaz claimed that despite his plans to hold the meeting on Sunday, he intends to declare the report confidential and not release it to the media. This way, voting on the issue will not be required. This move, however, does not rule out the possibility that some excerpts from the report will be leaked to the press.

Earlier in August, the former military chief said that he believes the IDF was gearing for a wide spectrum of scenarios in September, including some that call for reserve mobilization: "The military is getting ready… I believe that the (regional) unrest won't skip the Israeli-Palestinian peace process."

Mofaz voiced his concerns over Prime Minister Benjamin Netanyahu's "lacking assessment of the reality being formed and his job at the prime minister… The social omissions and the political ones – Netanyahu hasn’t negotiated with the Palestinian for two and a half years – will collide in the coming months. "Alll Netanyahu had to do was say 'yes' to Obama, but he lacks the courage and political leadership. He is afraid of Lieberman, of his coalition and of his own party, so he shies away from every chance of talking to the Palestinians," Mofaz concluded.