The Treasury and the doctors have reached a new wage agreement on Thursday, effectively ending the longest health system disruption Israel has ever known. After 158 days, protest marches and a symbolic mass resignation, the parties were able to agree on a deal, which will add NIS 2.6 billion (roughly $720 million) to doctors' wages and will significantly improve their employment conditions.

"I'm pleased to announce that we have been able to reach a great agreement with the Israeli Medical Association ending one of the longest strikes Israel has ever known," Finance Minister Yuval Steinitz said in a special press conference held Thursday afternoon. 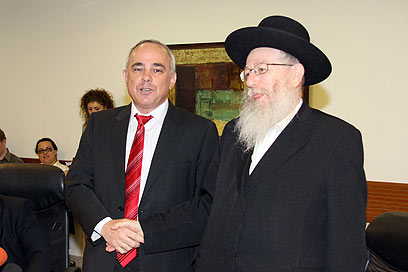 "This is a historic deal for the Israeli health system. This is a great step for the doctors and the residents, as well as for the health system, and it's also in the interest of social justice."

The agreement was effectively reached overnight, but legal counsels on both sides burnt the midnight oil, dotting I's and crossing T's on what has been described as one of the most legally-complex wage agreements ever to be devised in Israel.

Deputy Health Minister Yakov Litzman (United Torah Judaism) told reporters that "This is a historic agreement not just because of the wage contract. It also represents a breakthrough for medical services in the periphery."

Litzman did note, however, that "some of the conduct noted (by doctors) during the strike needs to be examined further. We cannot have State employees going against the State." Director of Wages for the Treasury Ilan Levin added: "We always knew a deal could be reached, but this was definitely a long journey. We insisted on a long-term agreement that would benefit with the periphery and create true promotion options for doctors, which this deal enables."

Dr. Nimrod Rahamimov, deputy director of the Israel Medical Association said that the new agreement both ensured a wage increase for doctors, but also "mends tears in the fabric of public medicine… which will eventually ease the unbearable burden shouldered by the doctors and residents."

Prime Minister Benjamin Netanyahu welcomed the new wage agreement signed with the doctors Thursday, saying it was "a true change for the health system in Israel.

"The negotiations have proven that true change can be achieved without undermining the economy."