Lost battle: An injunction prohibiting the deportation of foreign workers' children has expired this week, after a prolonged legal battle.

Among the children to be deported is four-year-old Ofek, who arrived at Ben-Gurion Airport along with her mother, Nancy Castillio – a foreign worker from the Philippines. The two are slated to board a flight back to the Philippines, after the Petah Tikva Family Court ruled that they must report to the airport's holding facility by 2 pm Thursday.

Castillio appealed to the court, asking that she be allowed to stay in Israel another month and leave voluntarily, but the court rejected the appeal, ordering them to leave as soon as possible. 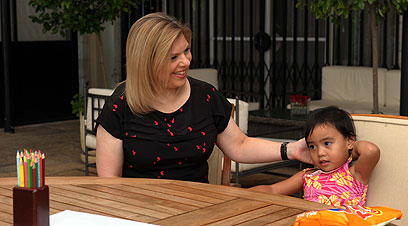 Sara Netanyahu with little Ofek (Photo: Avi Ohayon, GPO)
Last week, Nancy and her daughter were taken off a plane minutes before its departure, after the court issued an injunction. Prime Minister Benjamin Netanyahu's wife, Sara Netanyahu, joined the struggle and appealed to Interior Minister Eli Yishai, asking that he cancels the deportation order. The Population and Immigration Authority stated in response: "The judge made a very clear decision on the issue and every attempt to interpret this or that sentence as criticism against the policy is irrelevant. The bottom line is that the court declared the two as illegal aliens, and they must return to their country."