Noam and Aviva Shalit 'we will not give up'
Photo: Gil Yohanan

Parents of captive soldier write letter to mark his 25th birthday: 'We know that every day that passes is another nightmarish day of impossible suffering, days and nights of suffocating endless loneliness. But we do not forget you'

On Sunday Gilad Shalit, who was kidnapped by Hamas over five years ago, will turn 25. In honor of his upcoming birthday, his parents Noam and Aviva wrote him a letter, which they chose to share with the world: Our dearest Gilad, With the burning sun beating on our heads, on the sidewalk adjacent to Prime Minister Benjamin Netanyahu's home, we are trying to digest the fact that 1,890 days have passed and you still are not with us. We have been here on this sidewalk for over a year now, trying with all our power and using any means at our disposal to break the wall of imperviousness that lies between us and those who have yet to be convinced after so many days, months, years and after mistakes it is time to bring you home. We're here. We haven't given up, we haven't surrendered, and we have not been broken. And we are not alone. Our dearest Gilad, many many people who are strangers to you, who you have never met, think as we do, that it is inconceivable to speak of social solidarity, of national fortitude and of having faith in the State while abandoning you to your fate. Day after day, lonely and abandoned in Hamas dungeons for over half a decade.

Last summer tens of thousands marched for you, out of the belief that it would set your release in motion. This summer, tens of thousands marched on the streets in protest calling for social justice, the public's right to live and make a living with dignity, and we and many with us, added to that call the demand for your right to live, your oh so basic human right to freedom and liberty.

Our beloved Gilad, we know that every day that passes is another nightmarish day, a day of impossible suffering, days and nights of suffocating endless loneliness. But you must believe that we do not forget you, we do not forget the fact that next Sunday, you will be 25 years old, that this is your sixth birthday in captivity, that more than a fifth of your young life has been spent in a dungeon, a Hamas pit. 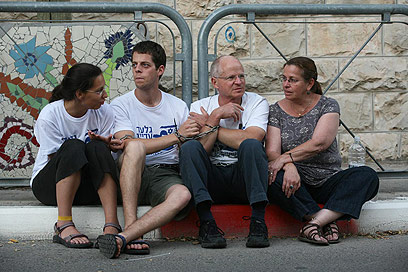 We know that you have no idea why the nightmare has yet to end, and why our many efforts have yet to bear fruit. We are trying to hold on to life though our life has become unrecognizable.

Your brother Yoel has already graduated from university at the Technion, and Hadas your younger sister is set to finish her military service any day now. And while these are supposed to be joyful and happy occasions, we are heavyhearted because you are being prevented from experiencing them.

With every moment that passes we try to seek an answer, advice as to what else we might do? What remains to be tried? How can we convince people that you aren't just a poster, a cardboard image or even a picture that can be found wherever you turn, how do we remind everyone both here in Israel and abroad that you are still there?

They constantly offer us shreds of hope, telling us they have made headway in the negotiations, but each time we see once again how hundreds and thousands of security prisoners are released from Israeli prisoners back to their homes.

We see money and goods continue to flow into the hands of those who have been imprisoning you brutally for years, that the conditions awarded to Hamas (yes, that same cynical organization that is holding you as a secret weapon) prisoners here in Israel are improved and no one really manages to change anything in spite of all the talk. And our hearts are heavy. For how long?

As more days go by our concern for your health, your very life, increases. Recycled and tattered statements will most likely once again make their way from the Prime Minister's Office in addition to the usual commentary and editorials published by experts on "terror" on behalf of the government and independently.

Statements that will say "we are doing everything in our power" (five years of doing everything in their power) and will continue to inspire fear in the Israeli public as if a deal for your release would bring terror back to Israel. As if leaving you to your fate in Gaza will prevent dozens and even hundreds of future casualties.

Your sacrifice changes nothing in the sensitive and unstable situation in our little state. Moreover, as time goes by, we see how our nation's sense of security, of the younger generation serving and enlisting in the military, and the parents who send them, is growing weaker in light of the breach of our unwritten pact (and not for the first time) between the state and its soldiers – the primary duty - to bring every soldier back home.

Yet we will not despair, and you must hold on because we must find a way to bring you back home to us, soon, tomorrow! With much love and endless yearning, Mom and Dad