Posters of Mubarak and Netanyahu in Cairo
Photo: Reuters

'Peace is in both nations' interest.'
Photo: Ofer Amram

On last Friday of Ramadan holiday many Muslims take part in demonstrations against Israel. Palestinians protest against separation fence in Qalandia, while masses demonstrate against US, Israel in Tehran. Despite expectations, only few hundred gather outside Israeli embassy in Cairo

While organizers expected a large turnout for the "million-man" protest, only a few hundred gathered on the last Friday of the Ramadan holiday in front of the Israeli Embassy in Cairo.

The protest was organized following the death of Egyptian soldiers during the terror attack in southern Israel last week.

During the protest, demonstrators reported hearing explosives, which turned out to be fireworks and shots that were fired in the air, according to al-Jazeera network. 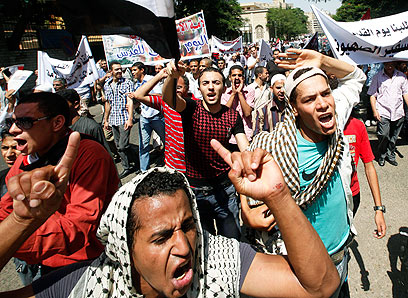 Local media reports claimed protesters called to severe diplomatic relations with Israel. "We don’t want even one Israeli on our territory," one protester was quoted as saying.

Meanwhile, several protesters gathered in front of the Egyptian Embassy in Tel Aviv. The demonstrators held signs in Arabic reading: "Peace is in both nations' interest," and "our flag burned – your honor burned!" 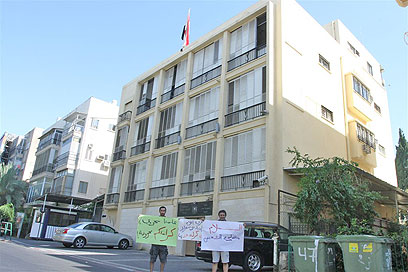 Also on Friday, Egypt and Israel agreed to increase the number of Egyptian troops in the Sinai border region after an eruption of violence in the area, a high-ranking security official told Reuters.

"After continued negotiations there is now an initial agreement between Egypt and Israel to deploy more Egyptian troops in the Sinai region," the Egyptian security official said, asking to remain anonymous.

The agreement was reached during long-running talks over border security. But the official said negotiations were pushed along by the deadly attack in southern Israel last week.

Earlier, Hezbollah Secretary-General Sheikh Hassan Nasrallah said on a televised interview that Egypt is at a new political era.

"If Mubarak was still ruling, the Egyptian response would have been completely different. He would have accused the Palestinians for the consequences of the Eilat terror attack. Nowadays, thousands of Egyptians protest in front of the Israeli embassy demanding to remove the Israeli ambassador," claimed Nasrallah.

Commenting on the upcoming Palestinian statehood vote at the United Nations, Nasrallah said: "Palestine stretches from the sea to the river. No one should give up a grain of earth or a drop of water, oil or gas from Palestine."

Also on Friday, some 150 Palestinians demonstrated in Qalandiya against the separation fence and clashed with IDF soldiers.

In Tehran, thousands demonstrated against Israel and the United States.

In Qalandiya, Palestinians hurled stones and bottles at the checkpoint. Soldiers responded with tear gas and shock grenades to disperse the protesters. The IDF later closed the checkpoint. An additional rally is being held in Bethlehem. 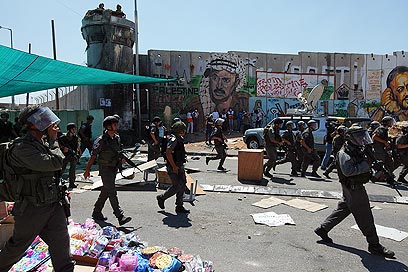 The Palestinians are protesting under the banner "The olive revolution" and are aiming to cross the separation fence into Jerusalem. The weekly protests in Bilin, Naalin and Nabi Saleh were canceled, to increase the number of participants in the Qalandiya rally. 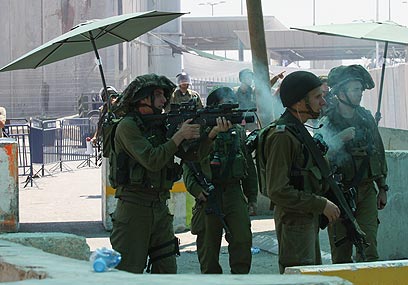 In Iran, President Mahmoud Ahamdinejad led a protest against the US and Israel. Iranian state TV said that authorities are expecting one million people to express support of the Palestinians. 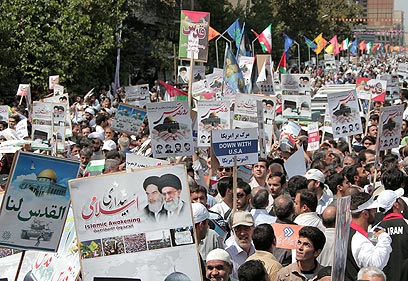 Anti-Israel rallies were also held in Thailand, outside the Israeli embassy in Bangkok, as well as in Indonesia.

Roee Nahmias, Yair Altman and Reuters contributed to this report