Muslim hatred in heart of Europe: More than 1,000 Muslims marched Saturday in Berlin and chanted anti-Israel slogans to mark al-Quds Day, set by Iran following the Islamist revolution in the country.

The protestors in the anti-Israel rally were faced by hundreds of Israel fans who also arrived at the site. 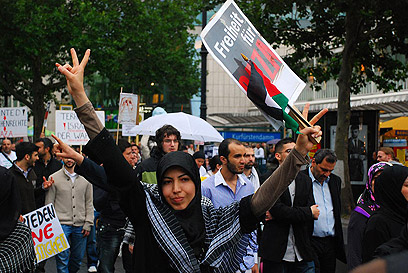 Police in the German capital deployed in force to separate the two camps and prevent violent clashes.

"What's taking place in Israel is a Shoah for the Palestinians," one of the radical ultra-Orthodox Jews, Rabbi Beck, told Ynet. "We are waiting for the day Zionism collapses, and then Jews and Muslims would be able to live side by side in peace."

While the rabbi spoke, protestors behind him were chanting "Allahu Akbar" and "Israel is a terrorist." 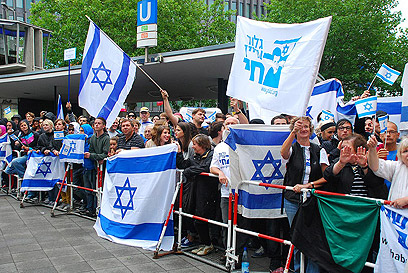 Pro-Israel (Photo: Zach Goldberger)
The Muslim protestors held up banners accusing Israel of committing war crimes, as well as photographs of late Iranian leader Ayatollah Khomeini. They chanted "Freedom for Palestine" and "End the killing of civilians in Gaza." Before reaching the square where a rally was held, protest organizers urged the marchers to refrain from anti-Jewish chants, which are considered a criminal offence in Germany.

The atmosphere became tenser as the Muslim marchers approached the pro-Israel rally at the site.

Several Israel fans who held up Israeli flags near the Islamist march were immediately surrounded by police officers, and were asked to refrain from chanting pro-Israel slogans while the march passed by.

Members of the pro-Israel camp were chanting "Free Gaza from Hamas" and "Israel forever."