Obama on Irene: 'This is not over'

US president says Tropical Storm Irene still a threat to public despite its downgrade. Homeland Security says worst of storm has passed for most areas

President Barack Obama says Sunday that while Tropical Storm Irene is weakening, it is still a threat to those communities in its path.

Speaking from the Rose Garden, Obama says the public is still at risk of flooding and power outages. He is urging people to continue to listen to the guidance of their state and local officials in the coming days.

Obama praised those officials, as well as first responders, for their work preparing and responding to the storm. He says it has been an example of how good government can benefit the public. 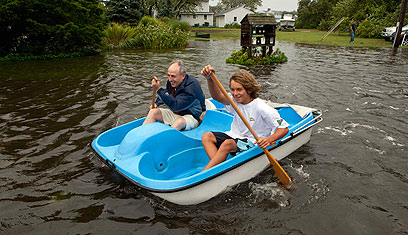 Irene weakened to a tropical storm Sunday but the huge weather system remained dangerous as it raced across a shuttered New York City, leaving behind a stunned US East coast where at least 16 people died, severe flooding was widespread and 4 million homes and businesses lost power.

Further north in New England, residents were bracing for flooding and winds that could topple many towering trees that sat in soil already saturated by earlier heavy rain. The storm was expected to move over eastern Canada by Sunday night.

Forecasters said Irene, while diminished in strength, was still massive and powerful, with powerful winds extending more than 300 miles (482 kilometers) from the center.

Irene's winds weakened to 65 mph (104 kph) after its long journey up the East Coast, where it dropped a foot (30 centimeters) of rain on North Carolina and Virginia. The National Hurricane Center downgraded the storm after its winds fell below 74 mph (119 kph), the threshold for a hurricane. 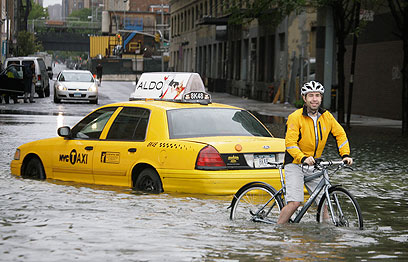 Homeland Security Secretary Janet Napolitano said President Barack Obama was briefed Sunday morning and instructed administration officials to continue to be aggressive in their efforts to deal with the storm and its aftermath. Napolitano said the worst of the storm has passed for most areas, but she cautioned that communities still in Irene's path should continue to be vigilant even though the storm had weakened.

As the eye of the sprawling storm blew through America's largest city and Long Island to the east, it pushed an 8 foot (2.5 meter) Atlantic storm surge toward New York. Briny water from New York Harbor submerged parts of a promenade at the base of the island of Manhattan. A foot (30 centimeters) of water rushed over the wall of a marina in front of the New York Mercantile Exchange, where gold and oil are traded.

Forecasters said early Sunday that Irene was moving to the north-northeast at 25 mph (40 kph) as it pushed northeast toward New England. Officials also warned that isolated tornadoes were possible in the northeast.

The huge storm had threatened 65 million people up and down the Atlantic coast, estimated as the largest number of Americans ever affected by a single storm.

As the center of the storm passed over Central Park at midmorning, floodwater reached the wheel wells of some stranded cars in Manhattan, and more streamed into the streets of Queens.

Forecasters said Irene, while diminished in strength, was still massive and powerful, with powerful winds extending more than 300 miles (482 kilometers) from the center. 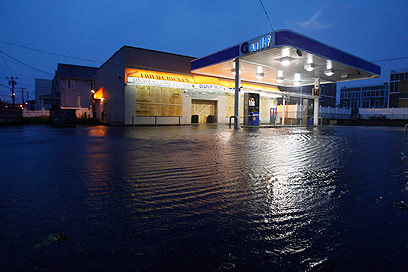 New York was eerily quiet. In a city where many people don't own cars, the population stayed indoors. The entire transit system was shut down because of weather for the first time ever. All of the city's airports were closed, with more than 9,000 flights canceled. Broadway shows, baseball games and other events were all canceled or postponed.

Bloomberg had warned New York's millions of residents they needed to avoid or evacuate low-lying areas.

"You could see newspaper stands floating down the street," said Scott Baxter, a hotel doorman in the SoHo neighborhood.

As the center of the storm passed over Central Park at midmorning, floodwater reached the wheel wells of some stranded cars in Manhattan, and more streamed into the streets of Queens.

Still, the storm didn't come close to inflicting the kind of catastrophic damage that had been feared in the city. The Sept. 11 museum, a centerpiece of the rebuilding of the World Trade Center site, said on Twitter that none of its memorial trees were lost. 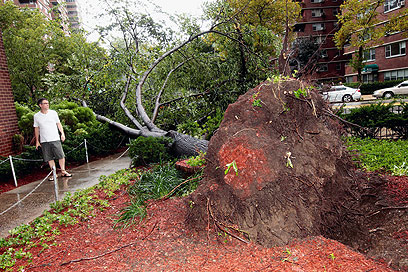 Irene made landfall just after dawn Saturday near Cape Lookout, North Carolina, at the southern end of the Outer Banks. Shorefront hotels and houses were lashed with waves, two piers were destroyed and at least one hospital was forced to run on generator power.

But as day broke Sunday, surprisingly light damage was reported in many places, with little more than downed trees and power lines.

At the same time, officials warned of the possibility of severe flooding over the next few days as runoff from the storm makes its way into creeks and rivers. In some parts of the Northeast, the ground was soggy even before the storm because of an extremely rainy August.

The deaths blamed on Irene included two children, an 11-year-old boy in Virginia killed when a tree crashed into his home and a North Carolina child who died in a car crash at an intersection where traffic lights were out. Four other people were killed by falling trees or tree limbs - two in separate Virginia incidents, one in North Carolina and one in Maryland. A surfer and another beach-goer in Florida were killed in heavy waves.