Staff members of embassies across Europe take part in Brussels seminar, learn how to use social networks to bolster Israeli message ahead of September UN vote

Staff members in Israeli missions worldwide are learning how to bolster their messages on the internet and social networks in preparation for September's UN vote on the Palestinian statehood bid.

As part of efforts to form a "moral majority" among major powers, some 60 staff members of embassies in Europe and representatives of Jewish organizations are taking part in a seminar in Brussels which trains them on the combination between public diplomacy and online media. 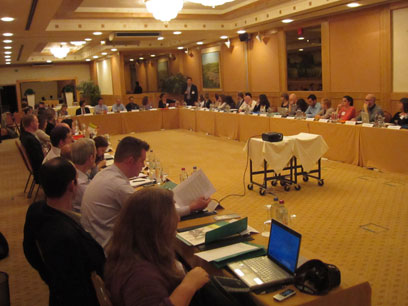 This is part of the NIS 10 million PR campaign the Foreign Ministry has been pushing this past year. Foreign Minister Avigdor Lieberman has hired the services of several European PR companies to this end.

"More than 80% of articles that are read in newspapers and traditional media outlets originate from such social networks as Facebook and Twitter," David Saranga, one of the organizers of the seminar, said.

"Our purpose is to upgrade the pro-Israeli coalition's abilities in Europe, particularly ahead of September," he added.

Saranga, a European Parliament delegate and former Consul for Media and Public Affairs in New York said: "European Union nations cannot be considered one piece. The public opinion in Britain or France is different from public opinion in Italy or Poland, which are more sympathetic towards Israel.

"That is why our purpose is to see how we can adjust the Israeli message to each of these countries and reach the ultimate combination between public diplomacy and the tools provided by social networks."

D.J. Schneeweiss, one of the seminar's organizers, noted that the course also aims to lift the pro-Israeli bloc's performances in Europe to a new level. "Handling the anti-Israeli bloc warrants activity on the ground, which is achievable by boosting contacts in the online arena."