'Terrorist was trying to get to the kids'

Guards recall how they subdued terrorist who attacked Tel Aviv night club, frequented by teens: 'He had murder in his eyes; it could have been a bloodbath'

Security guards working at the south Tel Aviv night club targeted by a terrorist Sunday night recalled the moments of horror from their hospital beds, and said that the outcome could have been much worse had the attacker managed to enter the club.

"I have no doubt that he was trying to get to the kids," one of Haoman 17's security guards, Aviv Krief, told Ynet. "I'm afraid to think what would have happened if he succeeded. There were thousands of kids there. It was a miracle they weren't hurt." Krief was hit by the by the terrorist's car in the first moments of the attack, and suffered broken bones.

Eight people were hospitalized when the terrorist, a 20-year-old Palestinian resident of Nablus, ran over people standing outside the club before proceeding to stab officers and security guards. Most of the wounded were Border Guards securing a nearby roadblock.

The terrorist, who was lightly injured, was taken to the Wolfson Medical Center and was placed under heavy security. He admitted during questioning that he had been planning the attack for some time now, and had purchased a knife specifically for the purpose of carrying it out.

"I stood at the roadblock, and suddenly he came out of nowhere with the cab, driving fast towards us," Krief recalled. "He hit a police officer and then me, and then he stopped. I didn't think it was a terror attack, I thought it was an accident. He was driving 100km an hour. I didn't know it was intentional, I thought it might be a kid that we didn't allow in, doing something stupid. There was screaming coming from all around us. 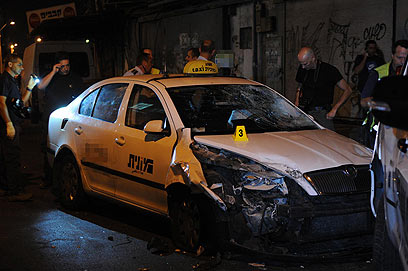 "The next thing I know the terrorist is lying next to me (at the hospital), and I'm imagining what I would do to him if only I could," Krief added. "He knew there was a club there. It wasn't a coincidence."

'He had murder in his eyes'

Another security guard who was sharing Kreif's hospital room said the attacker appeared deranged as flung his knife around.

"We were securing the party when we heard a loud noise about 100 meters from the club's entrance," he recounted the sequence of events. "We ran to the crash site, where I saw an officer lying on the road in a puddle of blood. 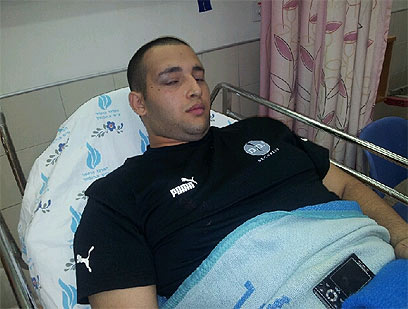 Aviv Krief in hospital (Photo: Moti Kimchi)
"Then I saw the terrorist with a large knife. He wouldn't stop stabbing. He was gripped by insanity, he thrust his knife over and over without stopping or talking. I immediately jumped on him and tried to take the knife out of his hand. I punched him hard to stun him, but he managed to stab me as well. " The guard, who asked to remain unnamed, said the outcome could have been worse. "He had murder in his eyes," he said. "It took us a few minutes to subdue him. The club was full of kids. If he would have reached them, it could have ended in a bloodbath." A., a guard working at another nearby club, lunged at the attacker to try to pry the knife out of his hand, but was stabbed as well. He said that the Border Guard officers serving on the scene played a significant part in preventing further bloodshed. "They were heroes," he said. "I have no words… the terrorist fought like a lion and screamed 'Allahu Akbar.' He was an average person, but very strong." Supervisor Lior Hen, who witnessed the terror attack and took part in arresting the perpetrator, said that the Border Guard was instructed by the police to increase security around night clubs for the duration of the summer break.

"The Tel Aviv backdrop creates a sense of security, but our training prepare us for such incidents exactly," he said. "Thanks to our training sessions, we knew how to act swiftly to prevent more injuries."

Neri Brener contributed to the report