Prosecution says popular singer conspired with crime bosses to blackmail her manager. In return, she promoted them in entertainment industry

Singer Margalit Tzanani was indicted Monday for extortion and conspiracy to commit a crime. The prosecution motioned the court to keep the celebrity, commonly known as "Margol," in detention until the legal proceedings against her are completed.

The prosecution wrote that "Tzanani behaved like the worst kind of criminal," and defined her as a crime boss.

The prosecution claimed that Tzanani conspired with criminals Michael Hazan and Shalom Domrani to blackmail her talent manager, Assaf Atedgi. Tzanani allegedly enlisted the senior crime bosses to her aid; in return, she helped them gain a foothold in the entertainment industry. 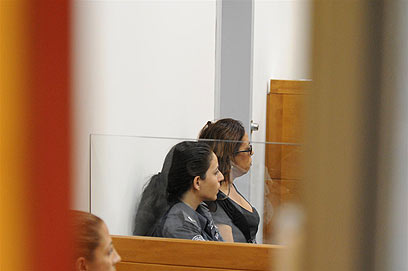 Tzanani at court (Photo: Yaron Brener)
According to the indictment, Tzanani entered a dispute with Atedgi over the representation of a popular singer, Omer Adam. The two turned to an arbiter, who ruled that Atedgi must continue sharing his fee for Adam's representation with Tzanani, but the singer had already lost faith in the manager. She then turned to Michael Hazan, who is described as a man with an intimidating presence who "removes teeth for a living," and asked him for help.

The police came upon a recording of a phone call that implicated Tzanani in the ordeal while searching for evidence to be used against Hazan. The latter is also being indicted in the case.

Detectives trailed the singer for four months before the indictment was filed, and even arrived on the set of "Kokhav Nolad" (the Israeli version of American Idol), where she served as a celebrity judge. Conversations recorded by the police showed Tzanani made it clear to her partners in the extortion that she does not want to physically hurt Atedgi.

Naama Cohen-Friedman contributed to the report