Only a few dozen meters and a security barrier separated between a Palestinian terrorist and a stolen taxi – and the thousands of teenagers partying on the streets of Tel Aviv.

Internal Security Minister Yitzhak Aharonovitch on Monday visited the scene of the overnight terrorist attack in Tel Aviv, in which eight Israelis were wounded, and lauded the swift response of the police officers and security guards who were injured in the incident.

"The officers' reaction prevented a much graver attack against teenagers," he said, adding that "the message of this event is that the police officers are the bullet-proof vest that prevents terror attacks against teenagers." 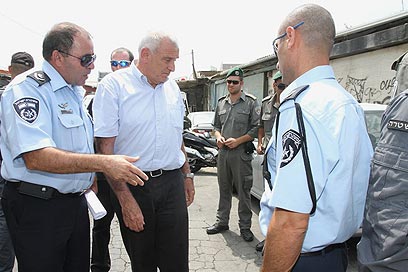 Aharonovitch and and TA police chief at scene of attack (Photo: Ofer Amram)
Three people are still hospitalized in Tel Aviv's Sourasky Medical Center; two are in serious condition and one sustained moderate to serious injuries.

According to an initial investigation, the terrorist – a 20-year-old man from Nablus – planned the attack on his own, purchased a knife and carjacked a taxi near the Tel Aviv central bus station.

The interior security minister said that the scenario of a lone attacker is known but very hard to predict. He also stressed that security forces try to prepare for such events as much as possible.

Aharonovitch entered the 'HaOman 17' club, where the attack took place, and called on students about to begin the new school year to "remain vigilant and report anything suspicious to the police." 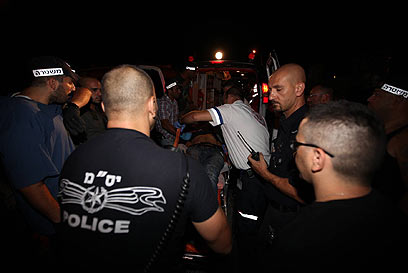 Earlier on Monday, Tel Aviv police chief Aaron Aksol said, "There is no doubt that the border police checkpoint prevented a much graver catastrophe. Our preparedness following terrorist warnings has proven itself."

Israel police chief Yohanan Danino also arrived at the scene of the attack and praised the border police preparedness. He explained that police forces were on alert ahead of the end of Ramadan and that's why the checkpoint was set up near the nightclub