Some 1,500 Egyptian soldiers were deployed across the Sinai Peninsula on Monday following an agreement between Israel and Egypt to increase the number of Egyptian troops in the peninsula's areas B and C, the London-based al Hayat newspaper reported on Monday.

According to the report, the sides are currently negotiating an agreement to deploy additional troops in the area.

Former Egyptian Ambassador to Israel Muhammed Basioni told the newspaper that "the Egypt-Israel peace treaty provides in clause 4 that each one of the sides can amend the security arrangements if the other side agrees to it.

"Egypt relied on this article – which prohibits the entrance of Egyptian military forces into area C and allows only police force presence – in order to amend its deployment arrangements in the area," he said. 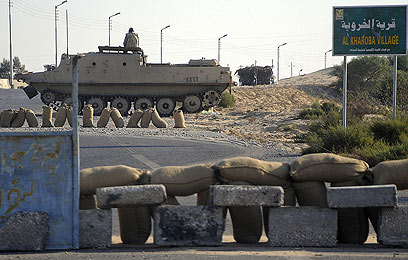 According to Basioni, "In 2008, Palestinians infiltrated Egypt from the Gaza Strip. Egypt then asked for the deployment of 750 border guard officers and the request was granted.

"Following recent security developments in Sinai, the authorities decided to launch a wide-scale security operation with large military and police forces, and to that end we requested to scour the area between Rafah, al-Arish and Sheikh Zawid," the former ambassador said.

"We've reinforced our deployment to 1,500 soldiers and armored vehicles in areas B and C," stated Basioni without saying when the forces entered the area.

Meanwhile, a senior Egyptian military official said that Cairo was "considering amending clauses in its peace treaty with Israel relating to deployment of forces, their scope and equipment stationed in the Sinai Peninsula in order to maintain security in the area," the Egyptian daily Al-Masry Al-Youm reported.

According to the report, the military council is reevaluating the clauses to adapt them to Egypt's new foreign policy following the January 25 revolution.

At the beginning of the year, the Israeli government unexpectedly decided to allow the Egyptian army to deploy 800 soldiers in the peninsula, for the first time since signing the peace agreement more than three decades ago.

In the 1979 peace treaty, the Sinai Peninsula was declared as a demilitarized zone and was divided into areas A, B and C, with the latter only open to international peacekeepers and Egyptian civilian police forces.

Meanwhile, IDF Chief of Staff Benny Gantz has ordered a reinforcement of army presence near the southern Gaza Strip and the Israel-Egypt border following a terrorist alert indicating that the Islamic Jihad was planning to perpetrate an attack in the area.

It is estimated that the terrorist cell has already left the Gaza Strip to Sinai, which has become a hotbed of terrorist activity in recent months. The defense establishment has also passed on details of the alert to Egypt.