While economists warn of widespread boycott of Israel in wake of Palestinian declaration of state, senior ministers more concerned about allocating billions for defense against third intifada

Economists, pundits and politicians warn that a unilateral declaration of a Palestinian state could put Israel in a corner by isolating the Jewish state both politically and financially.

The concern is that an increasing number of international companies and western nations will choose to boycott Israel – just like they did with South Africa under Apartheid – due to its continued control of the West Bank and its unwillingness to stop settlement construction. President Shimon Peres has warned of such developments, especially after a number of port authorities in Europe announced that they would not unload Israeli cargo.

In light of the heavy financial risks, it could be expected that the Finance Ministry would take extensive measures to prepare for the possibility that Israel's economy will take a blow. However, as of now, it seems as though the state prefers to invest the bulk of its efforts in diplomatic and military measures ahead of what the defense establishment expects to turn into a third intifada. 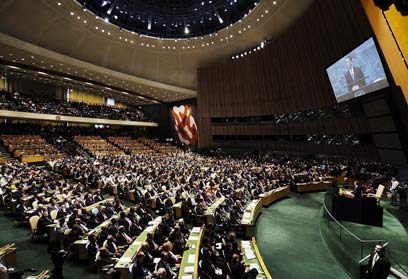 UN General Assembly (Photo: AFP)
Moreover, it is attempting to gain the support of what Prime Minister Benjamin Netanyahu defined as a "moral minority," which is to include about 30 western and European nations that will vote against the UN recognition of a Palestinian state.

Finance Minister Yuval Steinitz believes that Israel should focus its preparation efforts on the defense field.

"Joining the OECD, which includes 30 member states, gives us a kind of insurance," Steintz said in closed talks. "These are nations that cannot boycott Israel. Various companies and associations can boycott, but nations cannot. It doesn't make us absolutely immune, but it does make us stronger. "Israel needs primarily to prepare strategically," he added."To tell the truth, the Palestinians don't want to make peace." These days, the Finance Ministry is mainly getting ready for the possibility that Israel's economy would have to allocate billions of shekels for the defense establishment. If a third intifada breaks out, or if the Palestinians decide to launch a war of attrition on Israel's borders, it is the defense establishment that will have to deal with it; and it is still unclear how much financial resources it will require. "An escalation can hurt the Israeli economy," a senior Treasury official said. "We are seriously preparing for an emergency situation. While the Palestinian declaration might not create a financial problem in itself, a security flare-up can change the entire picture."

"Right now there is no series of sessions scheduled specifically to deal with September, but we are preparing for any situation," he added. 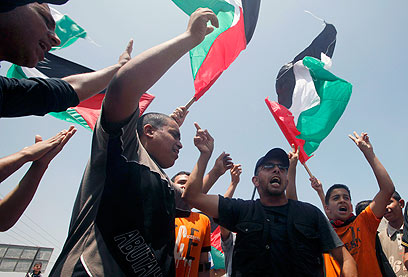 'Third intifada might hurt the economy' (Photo: Reuters)
In fact, Israel's leaders are not worried about boycotts that could harm the economy. "A boycott doesn't happen that fast," said a top minister who serves on the seven-minister forum and the Political-Security Cabinet. "Israel does research and develops software, but it doesn't produce the final products. Israel's role in the global hi-tech industry is very significant." He listed Intel as an example of a corporation that continues to invest billions of dollars in Israel, despite the anticipated implications of September. "Without Israeli hi-tech, nations will collapse," he added. "We are second in hi-tech exports to the US alone. This is why we cannot be boycotted." The finance minister also assures that there is no room for concern, claiming that Israel's economy will stay strong. "It doesn't mean that Israel's economy cannot be harmed," Steinitz said in closed talks. "But it cannot collapse. Israeli parts are incorporated in a variety of products, and they cannot be taken out. It's difficult to get ahead in the hi-tech industry without Israel. Who can forgo the USB drive, for example, or the computer microchips that Israel manufactures?" Steinitz, however, is readying for a possible security crisis, which would require recruitment of reserve forces and consequently hurt the market. Such a blow to the economy can ultimately lead to a disruption in tax collection. "This is the main problem that should be dealt with," the finance minister said. "I'm not calm in anticipation of September, but we should not exaggerate the potential harm to the Israeli economy."