Rivlin in Itamar: Israel is ours in its entirety

Knesset speaker visits site of massacre that left five family members dead in March, says 'peace will come when our neighbors allow us to live here together'

Knesset Speaker Reuven Rivlin visited the West Bank settlement of Itamar in a show of support for the the community where five family members were slaughtered earlier this year, and said he believes that "the land of Israel is ours in its entirety."

Rivlin met with Samaria Council Head Gershon Massika, toured an elementary school and paid a visit to the Fogel family's home, the site of the brutal attack that took place in March.

"There are political problems and questions," he told reporters during the visit. "Populating the land of Israel is a part of Zionism, which was once based entirely on a policy of settlement. 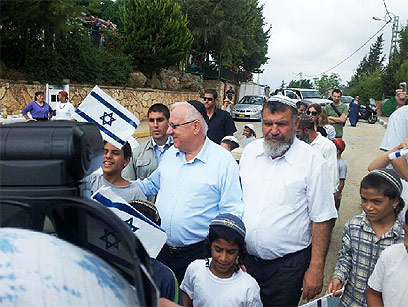 "I came here from Jerusalem, and saw Israeli and Palestinian cars on the road," he continued. "There will be peace when everyone can drive and live here comfortably; When our neighbors decide to allow us to live in the country together, there will be peace."

He added that in light of the events of the past year, "we should encourage the people here, who have shown extraordinary resilience. I whole-heartedly believe that the land of Israel is ours in its entirety."

While touring a local yeshiva, Massika walked Rivlin through the events of the massacre, during which a terrorist infiltrated the settlement's protective fence and stabbed five members of the family, including 3 children, to death in their sleep.

The yeshiva, where Udi Fogel, the father of the family, used to study, is undergoing an expansion in his memory. "This was a murder that shocked the entire people," Rivlin said. He added that the killing was perpetrated out of "pure hatred and for the sake of fundamentalism, which is difficult for human beings to understand." Massika lauded Rivlin for choosing to express his sympathy for Itamar, and urged him to act towards establishing educational institutions in the settlement "so that the kids here can study in dignity."