Turkish ultimatum to Israel: Apologize or face 'plan B'

Turkey's foreign minister issued a menacing warning to Israel Thursday, saying the Jewish state must apologize for a deadly 2010 raid on a Gaza-bound vessel by the time the UN report on the incident is published.

The UN Palmer Report is expected to be released in the coming days, and likely as early as Friday.

Addressing ongoing delays in releasing the UN report on the lethal IDF raid, Ahmet said, "It is not remotely possible for us to agree to a six-month delay," the Turkish Zaman news website reported. 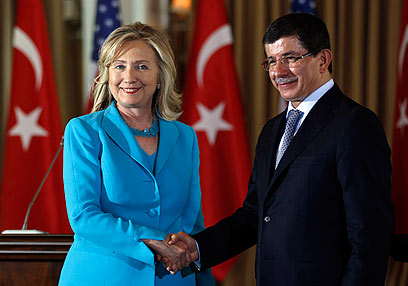 Clinton and Davutoglu (Photo: Reuters)
“For us the deadline (for the formal apology from Israeli officials) is the day the UN report gets released, or we resort to Plan B,” Davutoglu said, but did not elaborate on what the alternate Turkish route would be.

"We are not in a position to tell the UN to release or delay it," the Turkish minister added, referring to the upcoming Palmer Report, "but we will do as necessary when the UN finally does release it."

Last week, UN Secretary-General Ban Ki-moon announced that he was postponing the delivery of a UN panel's report on Israel's raid on a Gaza-bound flotilla that killed nine Turkish activists.

He said the reason for the delay was to give the two governments more time to reach a "harmonious agreement" on its findings.

Earlier this month, Prime Minister Benjamin Netanyahu declared that Israel will not apologize to Turkey over the 2010 flotilla incident, despite an earlier demand by US Secretary of State Hillary Clinton to do so.

At the time, Turkish Prime Minister Tayyip Erdogan said it would be impossible for Turkish-Israeli ties to improve without an apology. Minister Davutoglu also addressed the issue in an earlier news conference, saying that "if the Palmer Report does not contain an apology, both sides and the United States know what we will do."

"Israel is facing a choice: deeper relations with Turkey or open a gap with the Turkish state that will not be overcome very easily," he said.

Turkish officials already referred to "Plan B" and possible sanctions against Israel in the past, yet did not detail the measures they may adopt. However, according to information accumulated in Jerusalem, the Turkish plan may include the following steps: