Social protest leaders announce they will no longer be sleeping in tents, opting to turn them into community centers instead

Nearly eight weeks after the first tent was set up, tent cities across Israel have begun to dismantle themselves Sunday.

Rothschild's and Jerusalem's tent cities are taking it to the next level as social protest leaders announced Saturday they will no longer be sleeping in their tents, but instead be using them as conference centers and permanent meeting places.

"The protest is moving into phase two," protest leader Daphni Leef told Ynet. "Some of the tents will naturally be dismantled while others will become larger, grow stronger and prepare for winter. Some of them will turn into community centers where the public would be able to continue meeting and talking." 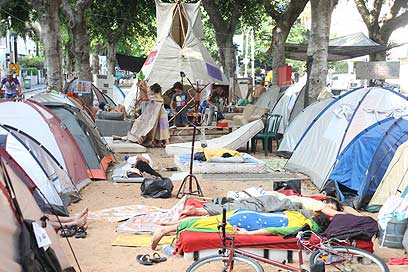 Yoni Levy, one of the protest initiators, said that during the upcoming week, "each encampment will decide how to proceed… Some tent cities will join other encampments. Others will choose to stay in the field. Some, like Tel Aviv's tent city, will undergo a re-organization process and become a center for permanent meetings of the protesters' community."

According to Stav Shaffir, another social protest leader, "We're not making history, we're creating the future. Israeli society has undergone changes. This summer was just our warm-up, the toughest battle is still ahead." 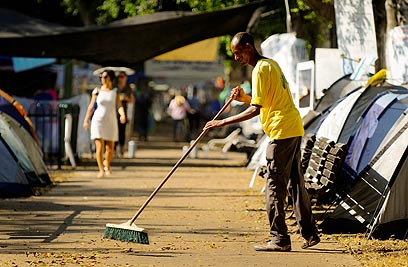 "Tomorrow the tents will be centralized and turned into community centers, where the people can determine their future."

Social protest leaders explained the tents and other equipment will be moved to central locations in each city, turning the tent communities into smaller, more permanent gathering spots for lectures, meetings and demonstrations to keep the social justice battle alive.

Tents once spread out along the Rothschild Avenue have become fewer in numbers, some replaced by defined public areas instead.

The famous public kitchen in Tel Aviv's tent city is also expected to move indoors, ahead of the cold days of winter yet to come. 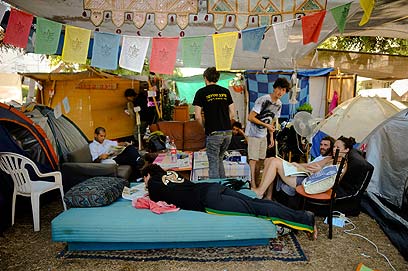 However, contrary to the social leaders' announcements, many activists claimed Rothschild's tent city will not be evacuated.

"There are two main groups here: Homeless people with nowhere to go and idealists, who must remain here if they want to turn the encampment into a community center," Yoav Fekete, a tent city representative, told Ynet.

"No one is really going to evict me from my tent," he added. "We must remember that there are people here without any solution… and we're not going to abandon them."

Israel's tent protest marked a climax point Saturday as more than 400,000 people took to the streets in demand for social justice in what was declared the biggest protest in Israel's history.

Some 250,000 gathered in Tel Aviv's State Square after marching from the city's Habima Square, according to police estimates.

Charlie Bitton, leader of the 1970's movement the Black Panthers lead the marchers. They expressed dissatisfaction over the high cost of living and chanted "The people demand social justice."