Hundreds of police officers and Civil Administration officials arrived at the West Bank outpost of Migron overnight in order to raze three permanent structures. A nighttime courtroom drama caused a delay but operations resumed before dawn and the security forces completed their mission, with relatively minor resistance. Police detained six settlers during the operation.

At around 1 a.m., the forces reached the location and surprised the settlers, catching them unprepared. While razing operations began at the site, the settlers rushed to submit a petition with the High Court of Justice, as the judge on call issued an interim injunction ordering the razing halted. 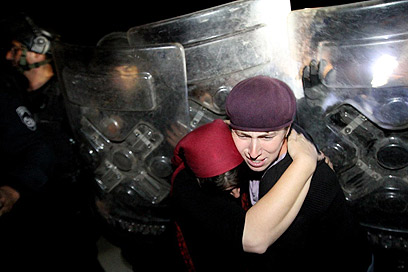 Chairman of the Yesha Council Danny Dayan and head of the Binyamin Regional Council alerted GOC Central Command, Maj.-Gen. Avi Mizrahi, of the injunction and the razing operations were stopped.

After about an hour, the bulldozers resumed work as the police was informed that the injunction was canceled at the State's request. Even though the locals did not try to prevent the operation, dozens of "hilltop youth" managed to penetrate the security forces' ring around the perimeter and tried to prevent the bulldozers from razing the structures. Six were arrested.

Security forces are preparing for a "price tag" operation, in response to the razing of the structures in the outpost. Indeed, hours later, a mosque in the village of Kusra, south of Nablus, was set on fire, Palestinian sources told Ynet.

According to the report, unidentified perpetrators broke the windows in the facility's ground floor, and set tires on fire there. Hebrew slogans were spray-painted on a fence outside the mosque. 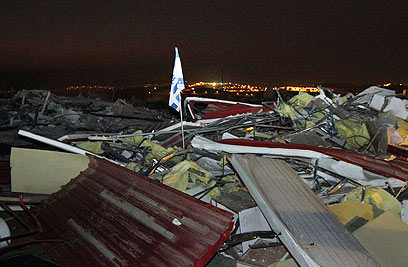 Earlier, the residents of the outpost claimed that the police, which was aware of the injunction, tried to carry out the operation prior to receiving the official document.

According to Chairman of the Binyamin Settlers' Council Itzik Shadmi, "Binyamin demands real justice and not the kind of justice that comes out of the Supreme Court. Bibi is trying to appease the Left after Saturday's social protest rally, divorcing the settlement enterprise in Yesha with his bare hands. He promised that when he would become prime minister, homes would not be destroyed." 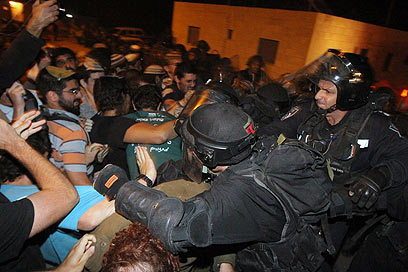 MK Michael Ben-Ari (National Union) said in response, "It fits Bibi to try and divert public opinion from the public protests by beating up on the settlers. There are too many advisors in his bureau that are capable of advising him to harm the settlements while using the 'hit the settlers and save yourself' method."

Migron is the largest and most developed outpost in the West Bank. Over 50 families live in the outpost. About a month ago, Supreme Court President Dorit Beinish and the honorable Miriam Naor and Salim Joubran ruled that the State must evict Migron by March 2012.

In their ruling, the judges noted that the case of Migron "is one of the most difficult and aberrant cases of illegal outposts brought before this court." 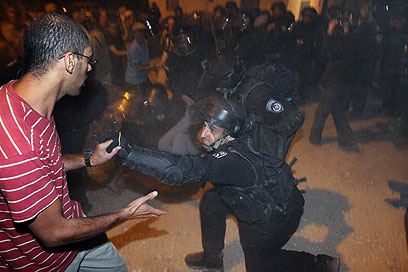 Three months ago, the State committed to demolish three permanent structures built in Migron during Passover within 45 days. The decision sparked debate between government officials and Yesha Council representatives, and days before the deadline, Defense Minister Ehud Barak petitioned to the High Court in a request to postpone the demolition due to "operational reasons."

Justices Beinish, Naor and Joubran deplored the State for delaying the demolition of the outpost despite its previous commitments. "You do not have a deadline," said Justice Joubran, "You determine everything by what the residents of Migron and Yesha Council say."