Iran is making headway towards rolling out advanced uranium enrichment machines that could speed up its production of nuclear reactor fuel as well as weapons-grade material if, as the West fears, it ultimately tries to assemble atomic bombs.

But it remains unclear whether Tehran, under increasingly strict international sanctions that crimp its ability to import key components, can manufacture the machines in industrial-scale numbers that would revolutionize its enrichment activity.

For years, Tehran has been seeking to replace the breakdown-prone 1970s vintage model of centrifuge it now uses to refine uranium, but the changeover has been hampered by sanctions restricting access to vital components, analysts say.

In a sign the Islamic state may now be making some progress, a UN nuclear watchdog report says Iran has begun installing two newer versions for larger-scale testing at a research and development site near the central city of Natanz.

The confidential report, obtained by Reuters on Friday, says Iran informed the United Nations' International Atomic Energy Agency (IAEA) in June that it had also started to operate 54 of these more advanced machines on an experimental basis.

If Iran eventually succeeds in introducing them in industrial quantities for enrichment, it could significantly shorten the time needed to stockpile material that can have civilian as well as military purposes, if refined much further.

"The installation of ... IR-2s and IR-4s represents progress, for sure," nuclear proliferation expert Mark Fitzpatrick said, referring to the names of the new models.

But analysts said it was not evident that Tehran has the technical prowess and components to make them in bigger numbers.

It seems that "Iran still faces problems developing these new centrifuges, including getting sufficient materials to build them in large numbers," said Peter Crail of the Arms Control Association, a US- based research and advocacy group. 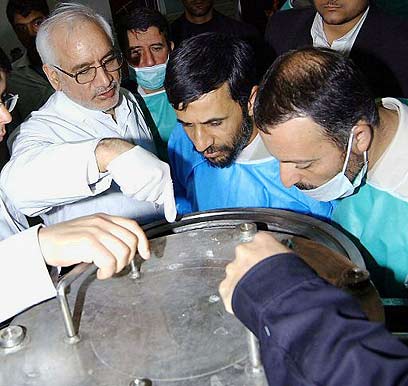 In a sign that deployment of the more advanced models for production remains some time off, Iran is planning to use the old IR-1 model when it shifts higher-grade enrichment from its main Natanz plant to a bunker near the holy city of Qom.

"Although Iran could possibly use these (IR-1) machines to produce weapons-grade uranium ... it would likely prefer to develop its advanced centrifuges first," Crail said.

Iran denies Western accusations that it is covertly seeking nuclear weapons capability, saying it is refining uranium for electricity generation and medical applications.

But the IAEA report said the U.N. agency was "increasingly concerned" about possible work in Iran to develop a nuclear payload for a missile.

This and other findings in the report may provide more grist for Western condemnations of Iran's nuclear activities when the 35-nation governing board of the IAEA meets on Sept. 12-16.

Robert Einhorn, the US State Department senior adviser for non-proliferation and arms control, said in March he did not believe the newer centrifuges were ready to be mass-produced, according to a think tank debate transcript.

Fitzpatrick, a director at the International Institute for Strategic Studies and a former senior US State Department official, said Iran's ability to make high-strength carbon fibre for rotors in advanced centrifuges was believed to limited.

"So how many more than can produce is an open question."

Iran's main enrichment production facility is also located at the Natanz complex, which is ringed by anti-aircraft guns to protect against any threatened Israeli or US air strikes.

Thousands of old model centrifuges spin at supersonic speeds in an underground hall to increase the fissile isotope ratio.

Iran's decision in early 2010 to raise the level of some enrichment from the 3.5 percent purity needed for normal power plant fuel to 20 percent worried Western states that saw this as a significant step towards the 90 percent needed for bombs.

Iran says it needs 20 percent uranium to convert into fuel for a research reactor making isotopes to treat cancer patients, and announced in June it would transfer this activity from Natanz to the Fordow subterranean site.

Shifting enrichment underground could offer greater protection against any attacks by Israel or the United States, which have both said they do not rule out pre-emptive strikes to stop Iran getting nuclear weapons.

Analysts believe Iran is still a few years away from being able to build an atom bomb and that its leadership does not seem to have taken a strategic decision yet to do so.

The latest IAEA report said Iran had now produced a total of 70 kg of the higher-grade material, still well below the amount needed for a bomb, if refined further to 90 percent.

But the Institute for Science and International Security, a Washington-based think-tank, said the monthly output rate of 20 percent enriched uranium had "increased significantly."