Defense and government officials accused IDF Home Front Command Chief Major-General Eyal Eisenberg of "exposing classified materials used during a situation assessment" on Monday, during his speech at the Institute for National Security Studies in Tel Aviv that same evening.

Eisenberg warned Monday of a "radical Islamic winter," revealing that advanced weapons were discovered in hands of terrorists during the latest round of fighting in Gaza Strip. He further said that "the likelihood of an all-out war is increasingly growing."

"It's unclear why an IDF general would seek to stir up tensions in the region and why he exposed secret intelligence information about new Palestinian capabilities," one official said. 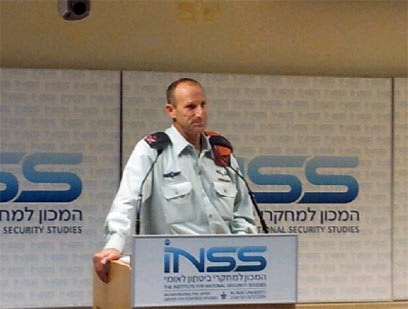 Notably, Eisenberg's remarks were approved for publication by the Military Censor.

During his address, Eisenberg revealed that new, more lethal arms surfaced in the hands of Gaza terror groups during the latest round of fighting in the area. As result of the disturbing development, Israeli civilians were instructed to adopt greater precautions, he said.

"We discovered a new weapon, and as result of this we instructed the public to hide under two roofs, rather than only one," he said.

In return, defense officials attacked Eisenberg claiming: "The IDF chief must control his general. Even the (IDF) chief doesn't say such things in public."

During his speech, the Home Front Command chief also warned that the upheavals across the Arab world and the deteriorating relations with Turkey might lead to a war in the Mideast.

"In Lebanon, Hezbollah is growing stronger within government arms, but it has not lost its desire to harm Israel, and the ties with Turkey aren't at their best," Eisenberg remarked.

Referring to what he characterized as the possibility of a "radical Islamic winter," Major-General Eisenberg said: "This raises the likelihood of an all-out, total war, with the possibility of weapons of mass destruction being used."

"Iran has not abandoned its nuclear program. The opposite it true; it continues full steam ahead," he said. "In Egypt, the army is collapsing under the burden of regular security operations, and this is reflected in the loss of control in the Sinai and the turning of the border with Israel into a terror border, with the possibility that Sinai will fall under the control of an Islamic entity."