Israeli state officials stressed Tuesday that the recent Turkish announcement of suspension of defense trade with Israel has more declarative significance than actual economic implications. The two governments have not traded with each other for some time and defense trade has also ceased long ago, state officials said.

"Erdogan may have cashed in on recent Israeli press talk about the possibility of damage to trade ties," a state official said. "He's also stressed out due to the fact that Israel refuses to get dragged into a verbal conflict with him." Since the publication of the Palmer Report, Jerusalem has rarely issued official responses to the crisis, with the exception of expressing hope that normal relations be restored.

The officials stressed that Turkey also stands to come out on the losing end if trade is indeed halted. "It appears Erdogan is choosing to act as if he's lost all his senses," the state official said. Earlier on Tuesday, Turkey clarified that the suspension of trade ties only applies to defense goods and not trade in general. 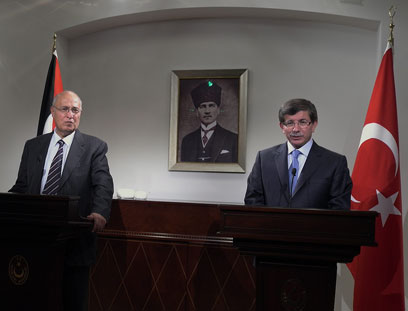 Ynet's Security affairs analyst Ron Ben-Yishai added that there has been no military trade between Israel and Turkey for the past 18 months and that no deals have been signed between the two governments. One deal alone, to increase the number of foreign Turkish workers in Israel, was meant to be signed soon.This is the only deal which will be affected by Erdogan's announcement.

Turkey's decision comes in the backdrop of statements by a line of Israeli officials, including Bank of Israel Governor Stanley Fischer, stressing the importance of the business ties with Turkey.

Despite silence from Jerusalem, one minister, Yisrael Katz, did make a public reference to the crisis with Ankara. Touring the north with Prime Minister Benjamin Netanyahu, Katz stressed that Turkey is the one who needs to apologize for last year's Gaza-bound flotilla.

"They should apologize to IDF soldiers," he said. "A UN committee established that Turkey did nothing to prevent the flotilla and that the naval blockade is legal. It will go on, otherwise Iranian forces and weapons will arrive in Gaza in such a way that will put Israel in greater danger."

The United States is also concerned over the recent crisis. On Tuesday, Defense Minister Ehud Barak met with three US senior officials, Obama aide Dennis Ross, US Ambassador to Israel Daniel Shapiro and special envoy to the Middle East David Hale. The parties discussed Israel's relations with Turkey, among other things, as part of an hour-long meeting.

International trade expert Attorney Avigdor Dorot explained that Erdogan's announcement constitutes a violation of international law. "Turkey is a signatory to the Israel Free Trade Treaty and is a member in the World Trade Organization together with Israel. The WTO forbids member states from boycotting each other and Israel or Israeli companies affected by such a boycott can turn to WTO bodies and sue a country for illegal boycott."

Dorot noted that the fact that the suspension of trade applies only to defense ties does not interfere with the possibility of a lawsuit, explaining that civil suits can be filed, and have been filed, against defense bodies.

"If Israel proves that Turkey suddenly stopped buying Israeli goods because of a political directive, Israel or Israeli companies can turn to international bodies and claim there was a violation of world trade agreements."

According to Turkish media reports, Devlet Bahçeli issued a statement saying that the deterioration in relations between Turkey and Israel proves that the policy of "zero problems" with Turkish neighbors has gone bankrupt.

Bahçeli claimed that the government is trying to avoid implementing an agreement calling for the deployment of a NATO radar within its territory by coming out against Israel. He explained that Turkey, which has failed to gain international support for its proposals, is finding refuge in false hostility towards Israel to garner internal support and avoid conflicts over the missile defense system.