US alarmed at Israeli-Turkish breakdown in ties

The Obama administration is scrambling to avoid further deterioration in ties between US allies Israel and Turkey.

Senior American diplomats, including Secretary of State Hillary Rodham Clinton, are working with both countries to "de-escalate" and "defuse" the crisis, the State Department said Tuesday.

Israeli-Turkish ties were strained even before the 2010 flotilla raid, but nose-dived last week after the release of a UN report on the incident. 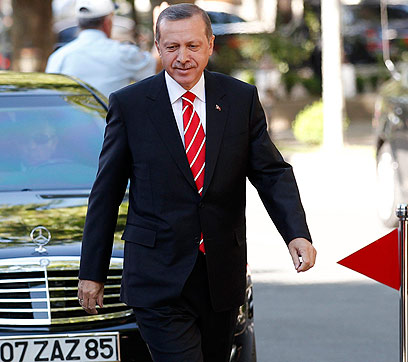 "We have over many months tried to work with our ally Turkey and our ally Israel to strengthen and improve their bilateral relationship," State Department spokeswoman Victoria Nuland said.

"We still believe that getting back to a good partnership between them is in each of their interests, and we will continue to work for that goal with both of them. But we are concerned about the state of the relationship today."

Turkey has suspended military ties with Israel, expelled top Israeli diplomats and threatened additional actions unless Israel apologizes for the raid. It also has said it will lobby other nations to support a Palestinian bid for recognition at this year's UN General Assembly which begins this month.

Israel, which is vehemently opposed to the Palestinians seeking UN recognition, has expressed regret for the loss of lives on the flotilla, but has refused to apologize.

"We want to avoid future confrontations and we want both of these strong allies of the United States to get back to a place where they have a good working relationship with each other."