Israeli ambassador to Egypt Yitzhak Levanon returned to the country late Monday from a private vacation after a tense period of several weeks during which widespread protests have been held in front of the embassy.

Anti-Israel sentiment in Egypt has been on the rise following the terror attacks near Eilat and the border incident in which six Egyptian soldiers were killed.

Recent articles on tensions with Egypt:

Former ambassador Shalom Cohen served as the envoy in Cairo during his absence. According to a report in the Kuwaiti newspaper al-Jarida, several embassy employees greeted him at Cairo airport after he arrived on a flight from Ben Gurion Airport. 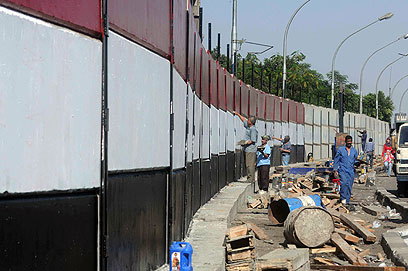 The wall around the embassy painted in colors of Egyptian flag (Photo: AFP)
In recent weeks, anti-Israel demonstrations have been taking place outside of the embassy, during which the protestors demanded that authorities expel the Israeli ambassador.

One protestor had even managed to climb on top of the embassy's roof and take down the Israeli flag. It was raised once again several days later.

Earlier this week, a private contractor began to build a security wall around the embassy that is intended to prevent protesters from reaching the embassy.

The contractor, Khaled Mahmud, claimed the security fence is expected to be a 100 meters (328 feet) long and 3 meters (9 feet) tall. According to the website, there are currently 30 construction workers on site.