US Defense Secretary: Reform movement learning from Tunisia, Egypt; says 'we should try to take every step to try to support effort'

Revolution in Iran appears to be a matter of time, US Defense Secretary Leon Panetta predicted on Tuesday, saying the Iranian reform movement was learning from revolts in Tunisia, Egypt, Libya and Syria.

Panetta, a former CIA director who took over the Pentagon's top job in July, was asked on the Charlie Rose television show whether the Arab Spring might spread to non-Arab Iran. Panetta responded: "Absolutely."

"I think we saw in evidence of that in the last election in Iran that there was a movement within Iran that raised those very same concerns that we're seeing elsewhere," Panetta said. 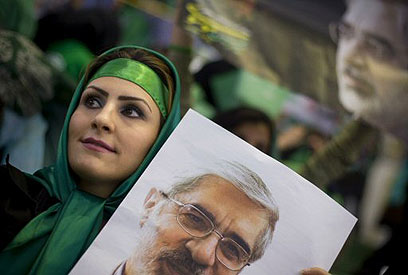 "And I think in many ways, it's a matter of time before that kind of change and reform and revolution occurs in Iran as well."

Iranian security forces crushed mass protests in the wake of Iran's disputed June 2009 re-election of President Mahmoud Ahmadinejad. Panetta acknowledged the difficulties supporting such protests given the potential for backlash.

"We should try to take every step to try to support their effort but at the same time, we've got to analyze each situation to make sure that we do nothing that creates a backlash or that undermines those efforts," he said.

Iran's leaders had hoped the Arab Spring would spell the end of US-backed regimes in the Arab world. Supreme Leader Ayatollah Ali Khamenei has dubbed it the "Islamic Awakening," inspired by Iran's 1979 revolution that replaced a Western-backed king with a Muslim theocracy.

But Panetta offered a different interpretation of events and their impact on Iran.

"I think the reform movement in Iran is learning one hell of a lot from what's happened in Tunisia and Egypt and Libya and Syria," Panetta said.

Supporters of Iran's opposition Green movement are watching the Arab uprisings with a mixture of admiration, regret for their own movement's failure and concern about what might replace fallen regimes.

"One of the issues we were looking at when Tunisia and Egypt happened is ... what sparked this? What made this all happen?" Panetta said, listing factors including social media and populations of youth who lacked hope for the future.

"The fact is when people decide that that moment has come, that's a moment when tremendous change is about to happen," Panetta said.

"And I think it's true, not only in the Middle East. It's going to be true in Iran as well."