City inspectors pay nocturnal visit to protest encampments, clear out empty tents; activists confront inspectors, calling them 'Nazis in a municipal uniform'; Huldai: There were drugs in the encampments

On Tuesday the inspectors visited the various encampments with flowers and asked that the tents be cleared out by the Rosh Hashana holiday but on Wednesday morning the flowers were replaced with trucks who swiftly removed the unoccupied tents.

On Wednesday morning, dozens of activists at Rothschild Blvd confronted city inspectors who arrived at the scene to clear out more tents. 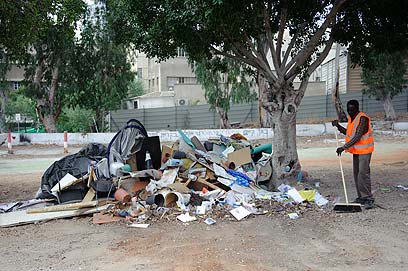 The activists called the inspectors "The dogs that (Mayor) Huldai let out this morning," and even "Nazis in a municipal uniform." They claimed that laptops and other valuable equipment were inside the tents that had been removed.

The city said in response, "This is not about removing tents that are inhabited but rather cleaning up and removing uninhabited tents." 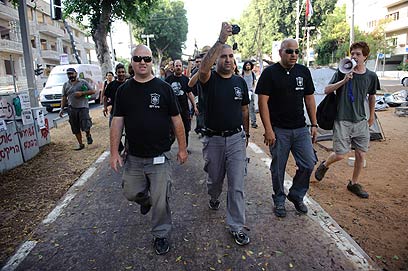 The mayor added, "I will not allow vandals to take over the public domain. The tent dwellers said that the idea of the tents has filled its purpose and they are leaving on their own volition, while we are setting up alternative meeting spots for them. It's time to get things back to normal. The protest is so just, I support it and will continue to support it."

Yishai Skali from the Nordau Boulevard encampment told Ynet: "They came like thieves in the night. The Tel Aviv municipality decided to dismantle the Nordau encampment completely, in the middle of the night, in spite of an earlier agreement that would allow the encampment to continue its operations for the foreseeable future.

"This is a cruel and cynical act that was carried out without a warrant and without a warning. It was only thanks to the encampment dwellers that woke up from the noise of the nearing trucks that a complete eviction was prevented."

"You wake up in the morning, exit the tent to go to work and within 20 minutes, the tent is gone," said Yoav Fakta, representative of the Rothschild Blvd encampment.

City inspectors and police officers also arrived at the Jessi Cohen neighborhood in Holon on Wednesday and dismantled ten wooden shacks that had been built there. Dozens of police officers closed the area for traffic as four protestors were detained. 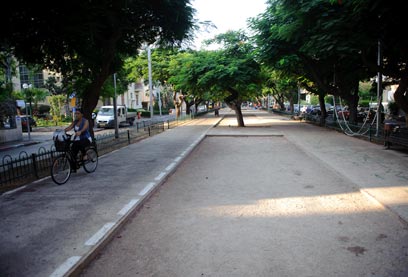 National Student Union Chairman Itzik Shmuli said in response that "the government is liable to create a needless clash with the protesters and so must join together with local authorities in stopping this foolishness immediately.

"Among the tent dwellers are homeless people who are holding on to the tent flaps for dear life to avoid falling into the abyss and the authorities should provide an immediate solution within the framework of the committee solutions rather than forcefully evict them." Shmuli noted that the Student Union sent a harsh letter to the prime minister in which it called upon him to prevent forced evictions. "So far the prime minister hasn't bothered to respond at all."

Shmuli made it clear that the students will continue to protest and will not stop until fitting solutions to the public housing problem are found.

On Sunday the protest organizers announced that the 'tent cities' would be re-organized nearly eight weeks after the first tent was set up.

The organizers added that protestors would no longer be sleeping in their tents, but instead use them as conference centers and permanent meeting places.

They explained that the tents and other equipment will be moved to central locations in each city, turning the tent communities into smaller, more permanent gathering spots for lectures, meetings and demonstrations to keep the social justice battle alive.