Wrapping up a turbulent day of protests, some 50 social activists gathered on Wednesday evening in front of Tel Aviv Mayor Ron Huldai's home to protest against his decision to evict the city's protest encampments. Earlier, 40 people were arrested for rioting and clashing with the police in front of City Hall.

The protesters chanted slogans calling on Huldai to resign. "We want to tell each elected official, not only Ron Huldai, that the power to end the protest is in our hands, because it appears that he got confused today when he tried to terminate it," said Yonatan Levy, one of the protesters.

The activists have filed for an injunction against the removal of the city's protest encampments. "Even if they try to evict us tomorrow, or the day after, or the day after that, we will not leave," Shula Keshet, one of the organizers of the Levinsky Park camp, told Ynet. Earlier, some 200 demonstrators gathered outside the Tel Aviv City Hall to protest the eviction, during which city inspectors cleared out empty tents and threw away unclaimed belongings.

"Up until now we were gentle, but we won't be quiet anymore. Our response to the privatization – a revolt," they shouted and proceeded to block off nearby roads and even boarded a bus passing by. Police officials had to take them out of the bus means of force.

Protesters threw eggs and belongings as the building and attempted to break in. Police officers were compelled to stop them forcibly, causing a clash to break out. Forty activists were arrested in the riots.

Daphni Leef, one of the leaders of the social protest, arrived at the scene but did not participate actively in the events.

"It's hard for me personally to see this violence," she told Ynet. "But a few people have been arrested in a violent manner, so you can't say that the violence is only perpetrated by the protesters. I think that the removal of the tents is outrageous." 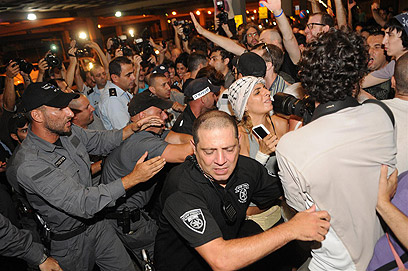 Leef said that while she believes in a nonviolent protest, the aggressive nature of the demonstration was driven by "real anger and a gut feeling. The people feel that they are being disrespected."

"I don't understand how the mayor could come out against them and say that the protest has exhausted itself," she said.

On Tuesday the inspectors visited the various encampments with flowers and asked that the tents be cleared out by Rosh Hashana. But on Wednesday morning the flowers were replaced with trucks that swiftly removed the unoccupied tents. 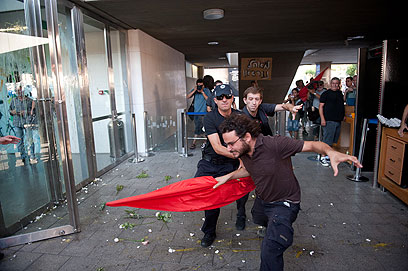 Dozens of activists at Rothschild Blvd confronted city inspectors who arrived at the scene to clear out more tents.

The activists called the inspectors "The dogs that Huldai let out this morning," and even "Nazis in a municipal uniform." They claimed that laptops and other valuable equipment were inside the tents that have been removed.

The city said in response, "This is not about removing tents that are inhabited but rather cleaning up and removing uninhabited tents."