German police on Thursday detained two men suspected of obtaining potential ingredients for a bomb and searched an Islamic center where the pair had spent time.

The arrests came three days before the 10th anniversary of the September 11, 2001, attacks, and followed a weekend statement by the interior minister that threats to Germany remained "real and intensive."

The suspects, a 24-year-old German of Lebanese descent and a 28-year-old from Gaza, were detained by officers in their Berlin apartments that were then searched for evidence, Berlin police spokesman Thomas Neuendorf said. 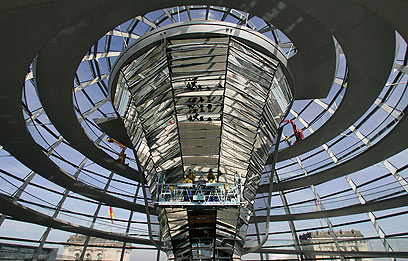 The men, who were not otherwise identified, are suspected of planning "a violent criminal act," and police had watched them for several months, Neuendorf said.

Unlike Britain or the United States, Germany does not have a state of alert, but maintains security through increased measures often not immediately visible to the public.

The Islamic center being searched was located in the heavily immigrant Wedding neighborhood. Some 10 police vans were seen around a building in a formerly industrial area. A sign on the building read "Ar-Rahman Mosque and Islamic Cultural Center for Religious Enlightenment."

"They are searching for chemical substances that can be used to make an explosive device," Neuendorf said.

Interior Minister Hans-Peter Friedrich, Germany's top security official, told the Passauer Neue Presse agency over the weekend that authorities "work intensively" to prevent attacks. German officials say they have thwarted several attacks since the 2001 assault that killed thousands in the US.