Cleared for publication: Egypt arrested four Israeli security guards, four crewmen on board Sea Pearl yacht near Straits of Tiran on Wednesday. Suspicion aroused after guards threw weapons overboard. They were released after questioning and upon Foreign Ministry's intervention

Egypt on Wednesday arrested four Israeli security guards and four crew members on board a yacht in the Straits of Tiran area. It was cleared for publication Friday that after their interrogation and as a result of intervention by the Foreign Ministry, the guards were released to Israel. They arrived in Eilat on board the yacht on Friday. The incident occurred on Wednesday afternoon, after the Sea Bell yacht carrying the Israeli guards encountered an Egyptian coastal guard ship. Despite being legally employed, the Israelis panicked and threw their weapons overboard.

Having noticed this, the Egyptian forces became suspicious. They arrested the Israeli guards and took them in for questioning in Sharm el-Sheikh.

Following the arrest, Israel's Foreign Ministry explained to Egyptian authorities that the incident was the result of a misunderstanding. The Egyptians eventually accepted that the Israelis were not involved in criminal or security-related activity and decided to release them.

The Israeli security guards work on Israeli cargo ships passing through the Somalia area, which is known for its piracy problem. In this area, guards are allowed to carry weapons, but in order to cross the Suez Canal – en route to the Haifa and Ashdod ports – the Israeli vessels are required to take the armed guards down. For this purpose yachts leave Eilat for the Straits of Tiran area and take the guards to the port. This normally-routine procedure ended with an arrest on this occasion. 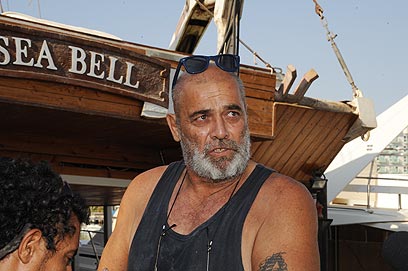 The Sea Bell belongs to Shimon Mashiach from Eilat who gives tourist tours in the Red Sea.

It arrived at Eilat Friday morning. First, the four crew members – three men and one woman – came down. A Navy representative boarded the yacht, apparently to question the Israeli guards.

Mashiach himself denies that the guards were questioned by the Egyptians. "We arrived in Egypt and they invited us for dinner and treated us beautifully. We were not under arrest. It was just a routine check. The Egyptians are our friends, we're in good relations. The guards were given dinner and were pampered. There was no investigation," he said.

An Egyptian jail still holds Ilan Grapel, a dual Israeli-US national suspected by the Egyptians of spying for Israel. Last month an Israeli citizen was tried for espionage in absentia.