Turkey: Erdogan will not visit Gaza during regional tour

Turkish PM's visit to Egypt - the first by a Turkish leader in 15 years - will be closely watched by Israel and by the United States; Erdogan will also visit Libya and Tunisia

Turkey's foreign minister said on Sunday that the prime minister will not cross the border into the Gaza Strip during his trip to Egypt but warned that Israel faces "growing isolation" in the region.

Ahmet Davutoglu said Sunday that Prime Minister Recep Tayyip Erdogan, who visits Egypt Monday, will also travel to Tunisia and Libya, but will limit his itinerary to those destinations.

Earlier, the Zaman Daily reported that Ismail Haniyeh, Hamas' prime minister in Gaza, said his administration was continuing with preparations for a possible visit by the Turkish leader despite uncertainties whether the visit will take place.

“We continue our preparations as if it is certain that Prime Minister Erdogan is coming,” Haniyeh told Turkey's semi-official Anatolia news agency in an interview in Gaza on Sunday. He said a high-level commission formed by a Cabinet decision was in charge of conducting the preparations. 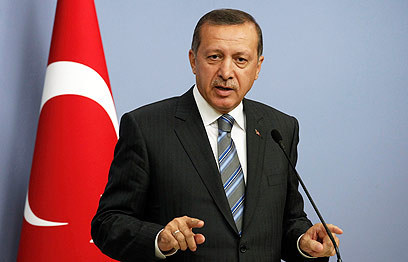 Erdogan's "Arab Spring tour" comes against a backdrop of escalating tensions with former friend Israel over the killing of nine Turkish activists last year -- a standoff that has strengthened support for Ankara in large parts of North Africa and the Middle East.

Arab countries, in the throes of popular uprisings, have watched the economic growth and influence of Turkey's secular democracy with a mixture of fascination and trepidation.

Under Erdogan's AK Party, rooted in political Islam, Turkey has boosted political and commercial ties with a region the country ruled under the Ottoman empire.

Last week, Erdogan threatened to back up his growing diplomatic clout with military action by saying he would dispatch the navy to protect flotillas against Israeli patrols -- an announcement analysts said could also alarm Arab powers.

The Arab revolts have forced Turkey to rethink its foreign policy, particularly in Syria, where former ally President Bashar al-Assad has defied Ankara's calls to end a bloody crackdown on protesters, and in Libya, where Turkey had billion-dollar investments before Muammar Gaddafi was ousted.

Besides seeking closer economic and military ties with the new rulers of regional heavyweight Egypt and oil-rich Libya, analysts say Erdogan will use his Sept 12-15 trip to cast himself as the champion of the Muslim world.

Erdogan is expected to give a speech on Monday at Cairo University, where his aides say he will set out Turkey's vision for the region.

"With the resounding victory of the elections in June, Erdogan has complete control at home and now he wants to assert himself as the leader in the Muslim world and the Middle East," said Gareth Jenkins, an Istanbul-based security analyst.

Erdogan's visit to Egypt -- the first by a Turkish leader in 15 years -- will be closely watched by Israel and by the United States, which has seen with alarm the deterioration of ties between Turkey and Israel and between Israel and Egypt.

Israel's peace deal with Cairo has come under increasing pressure since the fall of former Egyptian President Hosni Mubarak. The Jewish state would regard with suspicion signs of closer alliance between Egypt and Turkey at a time Ankara has taken a more confrontational attitude towards Israel.

"Turkey is using the Arab-Israeli conflict and the recent rising tension in the Arab region against Israel to publicize itself," said Nabil Abdel Fattah, political analyst at the Cairo-based Al-Ahram Centre for Political and Strategic Studies.

"All its moves against Israel are only meant to promote itself as a political power in the Arab region and spread its influence on the new generation of the Arab youth who are longing for change and power."

Ankara has already downgraded diplomatic relations with Israel and halted defense trade following the Jewish state's confirmation last week that it would not apologize for the 2010 assault on a Turkish boat challenging its Gaza blockade in which nine Turkish activists were killed.

But Ankara is likely to stop short of doing anything to alienate Washington, said Fadi Hakura, a Turkey expert at Chatham House.

"At the end of the day, Turkey sided with Washington on its key policies in the region -- hosting NATO's radar system, condemning Assad and distancing itself from Iran," Hakura said.

"Americans can live with Turkey's emotional outbursts unless, of course, they translate into a naval confrontation but I don't think that will happen."

Erdogan would be the first head of government to visit Libya since rebels fighting to end Gaddafi's 42-year-old rule entered Tripoli.

Hesitant at first to dump one-time friend Gaddafi and to back NATO operations, Turkey is taking a lead role in efforts to rebuild Libya, eyeing billion dollar deals.