Slogans spray-painted on leftist activist's door and stairway, including 'Peace Now, the end is near.' Cars torched, graffiti painted in Arab villages near Ramallah, Palestinians report

Unidentified perpetrators spray-painted slogans at the entrance to the Jerusalem home of a Peace Now activist on Sunday night, as part of a flurry of "price tag" responses to the recent demolition of illegal structures at the West Bank outpost of Migron. The words "Price Tag Migron" were spray-painted on the woman's apartment door, while the slogans "Migron forever, suppression of traitors," and "Peace Now, the end is near" were painted at her building's stairway. 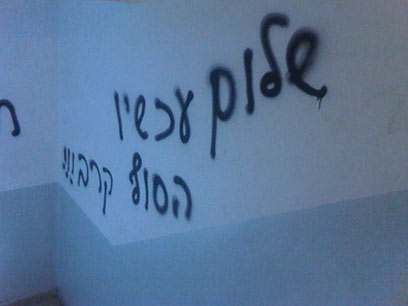 'Peace now, the end is near' (Photo courtesy of Peace Now)

The police searched the victim's car, but found nothing.

"In the years that I have spent with Peace Now, nothing like this has ever happened to me," the prominent activist, who asked to remain unnamed, told Ynet. "It's unpleasant but I'm not the only one, senior IDF officials and other activists have also been targeted by graffiti."

She said the events will not stop her from continuing her work with the left-wing organization.

"We should always be cautious, but it has nothing to do with what happened today," she said. "It doesn't mean that we will stop taking action for what we consider critical and important for the State of Israel."

Peace Now General Secretary Yariv Oppenheimer urged the police to act swiftly to apprehend the vandals. He said that an "atmosphere of hatred and violence" has taken hold of the public, and accused government ministers for being partially responsible for the dissemination of the hostile mood.

'Anger at extreme Left is understandable'

Baruch Marzel, chairman of the rightist movement Our Land of Israel, said of the latest incident that "even though we don't deal with 'price tag' acts, I won't condemn it."

"I can understand the anger that is directed at the extreme Left, which cooperates with the haters of Israel, and mercenarily hurts the pioneers of Judea and Samaria," he said.

Also Monday, Palestinian sources said that unknown elements set two private cars on fire and spray-painted graffiti on a wall belonging to one of the houses in the village of Burka, near Ramallah. The slogans read "Revenge on Arabs." A red Star of David was also painted. 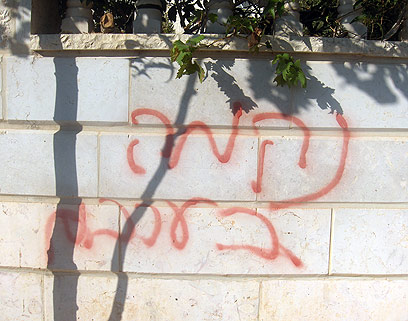 The Palestinians noted that the fire did not entirely consume the cars but that damage had been caused. The same sources reported that two additional cars and a garbage disposal truck were torched in a nearby village earlier on Monday. Hebrew graffiti was reportedly spray-painted in the scene.

The Civil Administration's razing of three homes at Migron last week has prompted a series of aggressive responses, including the torching of a West Bank mosque that occurred that same morning. Additional incidents of car fires and offensive graffiti were reported as well. Last Wednesday, anonymous assailants broke into an IDF base, destroyed army vehicles and spray-painted the slogans "Binyamin Brigade Commander – bad for the Jews" and "Regards from the hills." This was the first such act perpetrated against the security forces.