Itamar massacre: Hakim Awad, 18, tells Samaria Military Court he has no regrets, says he murdered five members of Fogel family 'over the occupation.' Defense attorney: Defendant as much a victim as Fogel family was

The Samaria Military Court on Tuesday sentenced Hakim Awad, 18, who was convicted in the murder of five members of the Fogel family in Itamar last March, to five consecutive life sentences and another five years in prison - a total of 130 years behind bars.

Prior to the sentencing Awad declared he was not sorry and claimed he murdered the five "because of the occupation." 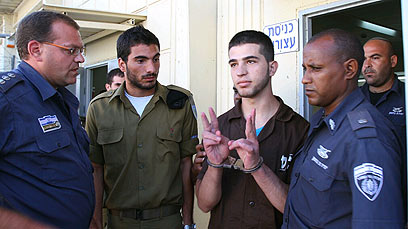 During the court hearing, Awad claimed that Israeli security forces tied up and killed two men from his village. "I am 18 and in my teenage years. Not any young man of this age thinks about murder, only a Palestinian man whose land was taken. This is what the state does to me every day. When I want to leave my village I have to undergo a search which always involves beatings."

As he left the court he motioned the V sign for Victory with his fingers.

The judges asked Awad, who confessed to the murder last month, to refrain from discussing politics and instead talk about himself. "I am a person like you, I have no mental condition, I never had a serious illness. My only illness is the Israeli occupation." He replied negatively when asked if he regrets his actions. 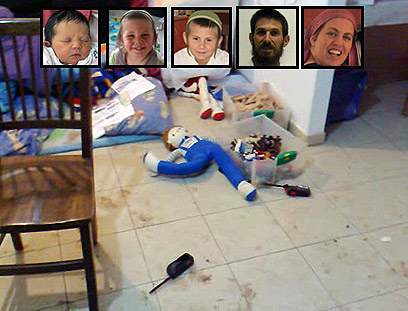 Fogel family victims and murder scene
Awad was convicted of murder as well as of arms dealing and involvement in a shooting incident. At one point during the hearing, one of the prosecutors presented a letter written by Yohai, Ruth Fogel's brother as well as a letter from Elad's nanny. "The children were murdered while screaming and fighting for their lives. It's hard to imagine a situation where the person standing before you is wrestling with a 4-year-old or an 11-year-old who were murdered. The two-month-old baby's only crime was that she cried. A helpless infant murdered by stabs to the head is a murder that is difficult to put into words."

The prosecutor said, "At the end of the day when one considers the murder and its consequences, a life sentence is still a light punishment. This event elevated the murder to an extreme level. It's not an explosive where the terrorist does not know his victims. Here the hands of the murderers are covered in blood."

He called on the judges not to consider the fact that Awad was underage at the time of the murder and to disregard any arguments for rehabilitation. "The defendant, in his actions, distanced himself from human company and acted on an malicious and satanic ideology deserving of the punishment the prosecution is demanding," he said. 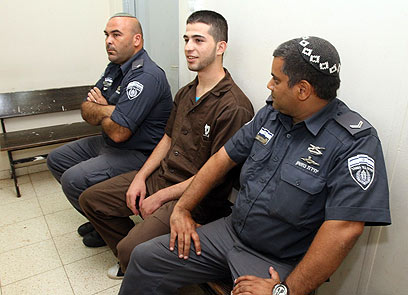 Defense Attorney Raed Erda claimed that the occupation was the cause of the murder. He noted that the Supreme Court had ruled that murders committed inside the territories are considered acts of war.

"The prosecutor mentioned that the murder of a baby is a cruel and harsh act but all murders are harsh – no matter whether it's of a baby, a young person or an adult. We're all human beings and our blood is the same. No blood is more red than another."

Erda enraged the judges when he claimed that the defendant was as much a victim as the Fogel family was. "When you build a Jewish community among dozens of Arab communities and do not provide it with the necessary security you can expect this to happen.

"Houses are being built on their lands, there's no work, no education, the occupation is pushing people from all directions and a boy like the defendant goes out and does things like this without realizing their consequences."

Presiding Judge Major Menachem Lieberman said, "There are cases that are shocking to the conscience and leave civilized people open mouthed at the face of evil."

Rejecting the defense's arguments, he said: "The defendant blamed everyone else for his actions. He blamed former IDF chief Dan Halutz, Prime Minister Netanyahu, the occupation, the settlers - everyone but himself."

Major Lieberman noted that the option of a death sentence was never considered, as Awad was underage when he committed the crime.

He mentioned that Hakim's accomplice, Amjad Awad, murdered three of the five victims with his bare hands and helped the defendant murder Elad and Ruth after he was unsuccessful in killing them himself.

The trial of Amjad Awad is still ongoing and he has yet to be convicted. The judge noted that Hakim was a fully fledged partner to the crime and had hid the weapons after the act and tried to cover his marks.

Haim Fogel, the father of Udi Fogel, said in response to the sentence, "It's not the punishment that matters. Even if the state had decided on a death penalty it wouldn't have helped any, it wouldn't have brought our loved ones back."

He lamented the fact that murderers enjoy favorable conditions in Israeli jails and that many are later freed in exchange deals.