As the US steps up its effort to prevent a Palestinian unilateral bid to declare statehood, Israeli officials fear a new eastern front in the form of Jordan. State officials warn that Jordan is in an extremely precarious state and effectively "hanging by a thread."

Jerusalem is also considering causing significant damage to the Palestinian economy. The Palestinian Authority, however has no plans to withdraw its statehood campaign.

More on the Palestinian statehood bid:

In the backdrop of US and European efforts to stop the Palestinian move, the EU's foreign policy chief Catherine Ashton will meet with Prime Minister Benjamin Netanyahu in Jerusalem on Wednesday. 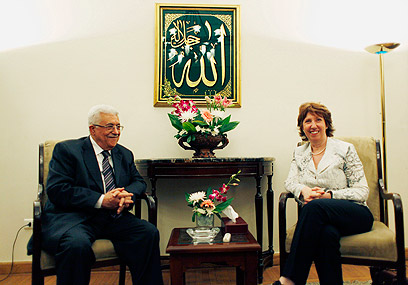 US envoys Dennis Ross and David Hale will also arrive in the region this week. Netanyahu meanwhile is meeting with Quartet envoy Tony Blair for further discussion on the Palestinian bid.

While Israel continues to push for a resumption of peace talks, it is also increasing threats on the PA to stop its unilateral campaign. State officials told Ynet that Jerusalem is considering causing significant damage to the Palestinian economy in light of its great dependence on Israel in the labor and commerce fields.

The US has already threatened Palestinian Prime Minister Salam Fayyad and President Mahmoud Abbas to cut financial aid if they promote unilateral moves.

"The US and Europe have stressed that the road to peace is through negotiations and not through the UN. There are a number of steps including ones that target the Palestinian economy on the table."

Meanwhile, sources close to Palestinian leaders say that efforts to reach an acceptable UN resolution proposal with the Europeans continue. Such a proposal may soften the PA bid which will allow some European states to vote in favor of the UN bid. 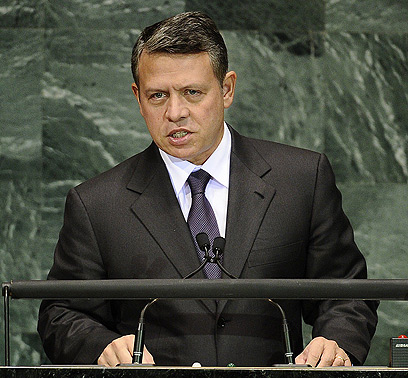 "The situation in the Middle East does not allow for irresponsible moves from the Palestinians, steps that will fail to bring security, peace and a Palestinian state, what they will bring is lack of stability."

Israel refused to issue an official response to King Abdullah's Monday statements, but state officials noted that "the king's statements should be monitored in light of the delicate domestic situation in the kingdom."

Israel believes that Abdullah was obliged to express himself in that manner due to the intricacy of the current situation in Jordan and the region. Nevertheless, government sources note that "there is no need to get worked up. The king has a strong bond with the Americans and firm joint interests with Israel. Calm must be kept in the area and events must be monitored."

In spite of the pressure being brought upon them it appears that the Palestinians are determined to follow through with their plan to seek recognition at the UN and the current inclination is to launch the move through the Security Council.

A Palestinian source told Ynet on Tuesday that the Palestinian leadership feels it has crossed the point of no return. "We aren't closing any doors but we believe it's too late to come in now with proposals."

The source referred to the meetings held over the last two weeks, initiated by the Europeans and Americans, like the meetings held between Abbas and Catherine Ashton as well as the David Hale and Dennis Ross who met with Abbas last week and are expected to meet with him again next week.

The source expressed surprise over the fact that the diplomatic endeavors were attempted so close to the opening of the General Assembly though the Palestinians' plans were no secret. "We have been discussing the option of going to the UN is September for over a year and only now, at the last minute, they are trying to dissuade us from the move by exerting pressure."

Ramallah's state of mind was reinforced on Tuesday as Fatah Central Committee member Mohammed Shtayyeh said the Palestinian leadership would listen to any proposals but suggested the current US push had come too late.

"We are open-minded to any proposal. And we are ready to engage with any proposal. But this is not a step to really stop us from going to the United Nations," he added. "If the whole idea of a proposal is to engage peacefully then you don't really bring it in the last five minutes of the hour."