Palestinian leader says PA to proceed with UN bid in September because President Obama endorsed Palestinian state; 'I’m going to the UN in order to demand our legitimate rights and secure full membership,' he says

"We are going to the Security Council," Abbas added, but then made it clear that "all options are open" and that a final decision has not been made yet.

Abbas said the Palestinians will be aiming to "secure independence in the 1967 borders and its holy capital, Jerusalem." He also urged his countrymen to avoid violence, saying "we must avoid force." 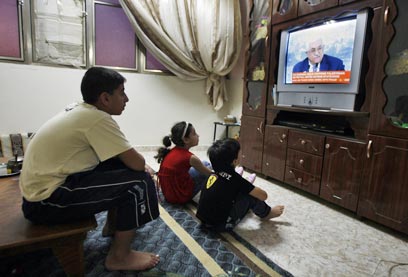 "We are the only legitimate representative of the Palestinian people and we intend to keep going until we secure full independence," he said.

Abbas added that the Palestinians are proceeding with their United Nations statehood bid in September because US President Barack Obama said previously he wanted to see a Palestinian state.

'We don't want to isolate Israel'

Turning his attention to Israel, the Palestinian leader slammed the Jewish state for what he claimed was its failure to advance the peace process. He said that the refugee problem needs to be resolved, charging that the Israeli government only wants negotiations for the sake of negotiations.
However, the Palestinians are not proceeding with their UN bid in order to isolate Israel, the Palestinian leader added. "We are not going to annul Israel's legitimacy," he said. "Nobody can annul Israel's legitimacy. It's a recognized state," he said. "We wish to isolate Israel's policy."
Israel's policy of occupation is the Palestinians' "catastrophe and nightmare," Abbas said, slamming Israeli arrests and attacks by settlers.

"We wish to isolate the legitimacy of the occupation, but not Israel's legitimacy," he said. 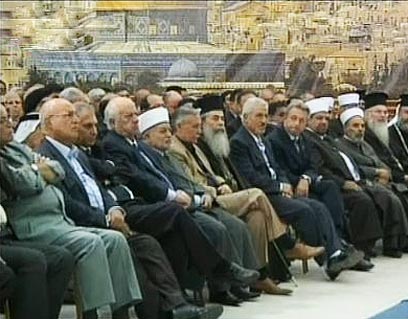 Ramallah audience (Photo: Reuters)
Abbas also urged his countrymen to avoid violence as the PA's submits his UN statehood bid. "Every march must not be violent. We must avoid force and avoid being dragged there," he said. "This is what they want. Don't give them an excuse. We want a state and that's it."

Earlier Friday, details of an apparently softened Palestinian UN bid started to surface. The Al Hayat newspaper published a portion of the watered down draft of a Palestinian proposal, which is being negotiated between the Palestinian Authority and the EU.

According to the report, the proposal includes 20 clauses, only four of which have been agreed upon.

On Wednesday, Foreign Minister Avigdor Lieberman warned that a unilateral declaration of a Palestinian state would have "dire consequences."

Israel has "shown great generosity towards the Palestinians, but it did not bring us peace," he said.

Speaking at the Second Agricultural Conference in Kibbutz Revivim, in southern Israel, Lieberman stressed that "while there is no room for threats" should the Palestinian Authority's recognition efforts prevail, the move will have "dire consequences."

"It's been 18 years since the Oslo Accords and we've tried everything… I accept that I'm the 'bad guy' but what have the others done? Barak, in Camp David, agreed to all (Palestinian) demands. What did we get in return? Another intifada and more bloodshed," he said.