West Bank settlers have begun preparing for mass marches into Palestinian Authority territories in what they dubbed as "sovereignty marches," in an attempt to protest against the upcoming Palestinian statehood bid at the United Nations. The settlers are concerned that the IDF would be "too trusting" in the Palestinian security forces if the Palestinians decide to riot and get too close to the Jewish settlements.

"The IDF orders are unclear as to what would happen if Palestinian rioters approach too close to the settlements," said a security officer at one of the settlements. 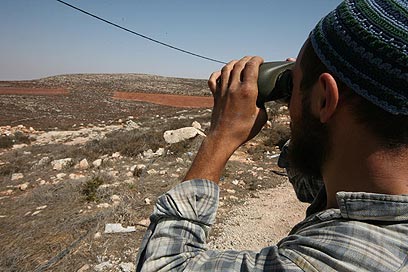 "We won't allow Palestinian rioters to enter the settlements, cause damage to our property or heaven forbid – injure someone. In such cases, we won't hesitate to use live ammunition."

The settler rallies are set to begin Tuesday afternoon, as participants plan to make their way towards the IDF District Coordination and Liaison Command. A protest is also slated to take place on the streets of Tel Aviv. In addition, right wing extremists are expected to head in the direction of Palestinian communities in order to shift the conflict into PA territories. The West Bank regional and settlers' councils planned to hold the marches in three separate locations: From Itamar to Nablus, from Beit El to the closest IDF District Coordination and Liaison and from Kiryat Arba to Manoach Mountain.

Tens of thousands of Israeli flags will be distributed by the West Bank regional councils and hung from the settlers' cars. 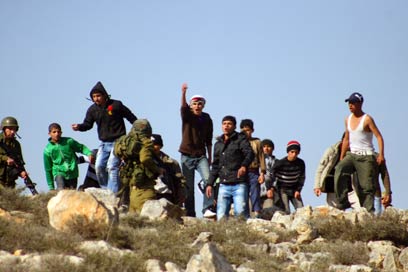 Gershon Mesika, head of the Shomron Regional Council, remarked that he was not flustered by the Palestinian diplomacy concerning the UN. "Most of the decisions made by the UN during the past decades were against the State of Israel. The entire world has come to realize it's an automatic majority. As Ben-Gurion said, it doesn't matter what the non-Jews say, it only matters what the Jews do." Hilltop Youth leader Meir Bertler expressed his hope that Israel would annex the West Bank settlements. "As far as we're concerned, we're going to feel right at home in the West Bank, and this week we'll hold marches, begin construction and show our presence in order to make it clear to everyone exactly who this country belongs to." Far-right activist Itamar Ben-Gvir stressed that his counterparts will not be "waiting at home so the Arabs might get close to their fences." "We're going to go out and make it clear to the Arabs who the home owners are. We're going to take the initiative and march towards Palestinian towns."

Meanwhile, security and police forces have begun preparing themselves for expected riots in the West Bank. Thousands of police officers have undergone training for possible scenarios, including riots, mass rallies and attempts to break into West Bank settlements.

Watch riots at Kalandia checkpoint north of Jerusalem over the weekend (Video: IDF)

Police forces are also taking into account possible terror attacks and massive rocket firing from the Gaza Strip ahead of the upcoming UN bid.

However, at this point IDF officials predict that with the exception of local incidents, the mass marches and rallies will not turn violent.

Meanwhile, IDF forces are preparing to stop the demonstrations in case the Palestinian forces fail to prevent them. GOC Central Command Avi Mizrahi has instructed his forces to show restraint.