PM certain that as a result of the American actions and tight cooperation with (Washington) and other governments, Palestinian attempt will fail; Israeli leader also downplays UN General Assembly vote

"The Palestinian attempt to become a permanent UN member will fail," Prime Minister Benjamin Netanyahu said at the start of Sunday's cabinet meeting in Jerusalem.

According to Netanyahu, full UN membership was "the goal the Palestinians outlined a year ago and it is the goal that Abu-Mazen put forth on Friday. The UN Security Council is like the government of the UN and I am certain that as a result of the American actions and the tight cooperation with (Washington) and other governments, this attempt will fail."

Latest on the Palestinian statehood bid: 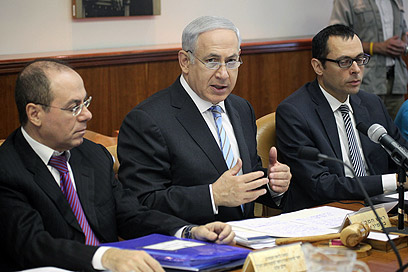 The prime minister said that he wasn’t concerned about the expected vote at the UN General Assembly. "It is the UN parliament where any vote can be passed. It does not have the importance that the Security Council has."

Netanyahu added that his trip to New York this week has two goals: "First, to stress that it is a move that bypasses negotiations which will not succeed and will be blocked. The second goal is to address the assembly and present our truth: the fact that we are not strangers in our land and have rights in this country that go back 'only 4,000 years', and that we have right to preserve our security."

Netanyahu criticized the Palestinians for avoiding direct negotiations. "Israel wants peace but the Palestinians are doing everything to thwart direct talks. They disregarded all the offers I made at Bar-Ilan University, the Knesset and Congress. "They avoided entering talks after the unprecedented 10-month construction freeze and they must understand that despite the current attempt to bypass talks again, peace will only be achieved through direct negotiations," he said.

According to Netanyahu, "In my opinion, at the end, after the dust settles around what's going on in the UN, the Palestinians will come to their senses and abandon the path of bypassing negotiations."

The prime minister will head to New York later this week where he will meet US President Barack Obama on Wednesday. Two days later, he will address the General Assembly. Members of the Quartet will meet in New York on Sunday in a last-minute effort to bring the two sides back to the negotiating table. The US will try to avoid vetoing the Palestinian statehood proposal at the Security Council and is trying to persuade six other nations to oppose the bid. Diplomats at UN headquarters in New York are having a hard time determining which nations will oppose and which will support the Palestinian cause, so long as the PA has yet to submit an official request to the UN body.

Security Council members that will support the Palestinians are Lebanon, Russia, China, Brazil, South Africa and India. The Americans are in the midst of a diplomatic blitz on the eight others: France, Britain, Germany, Bosnia, Portugal, Gabon, Columbia and Nigeria.