Turkey to freeze EU ties if Cyprus gets EU presidency

EU-candidate Turkey will freeze relations with the European Union if Cyprus is given the EU presidency in 2012, Deputy Prime Minister Besir Atalay was quoted as saying by state-run news agency Anatolian late on Saturday.

The comments were the strongest yet by Ankara over its opposition to the Cyprus presidency and could mark the start of a new low point in ties between the European Union and Turkey which began accession talks to the bloc in 2005. 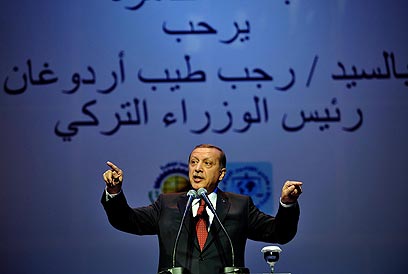 The comments also come at a time of heightened tension in the eastern Mediterranean where Turkey is locked in a row with Cyprus over potential offshore gas deposits. Turkey's relations with one-time ally Israel are also at a low.

"If the peace negotiations there (Cyprus) are not conclusive, and the EU gives its rotating presidency to southern Cyprus, the real crisis will be between Turkey and the EU," Anatolian quoted Atalay as telling Turkish Cypriot Bayrak Radio and TV at the end of a trip to northern Cyprus.

The internationally-recognized Greek Cypriot government is due to take on the six-month rotating EU presidency in July 2012.

Cyprus has been divided since a Turkish invasion in 1974 triggered by a brief Greek-inspired coup. UN-sponsored peace talks between Turkish Cypriots and Greek Cypriots have stumbled since they were relaunched in 2008.

In July, Turkey's European Union minister said freezing ties with the Greek Cypriot EU presidency was "an option" but Atalay's comments were the first time Ankara has said it would definitely halt relations.

Greek Cypriots represent the island internationally and in the European Union, while Turkey is the only country to recognise the Turkish Cypriot state. Greek Cypriots say Turkey cannot join the bloc until the Cyprus conflict is resolved.

The rotating presidency has lost some importance since the EU's Lisbon treaty, which established a permanent head of the European Council that groups national governments, and a new foreign and security policy chief. But a determined country can still shape the agenda.

Of the 35 "chapters" -- policy areas of EU law -- Turkey has completed one, and 18 have been frozen because of opposition by EU member states including Cyprus and France.