The Jerusalem District Court held a hearing on Sunday in the murder case of Kristine Luken, a tourist who was brutally killed by a Palestinian cell last December in mountains outside Jerusalem while visiting the area with her friend and tour guide, Kaye Susan Wilson.

Wilson, who was almost killed that day as well, described the incident before the court and burst out crying. "Kristine and I went walking in the forest," she recounted. "We walked up to a vantage point and sat on a rock. Suddenly we saw two men bending over. I didn't understand what they were doing," Wilson testified before the court.

"I told her not to talk because I was frightened. They asked us in Hebrew if we had water. I humorously answered 'I wish' because I didn't want them to get close to me. I had a bad feeling. I took out my pocketknife just in case something where to happen." 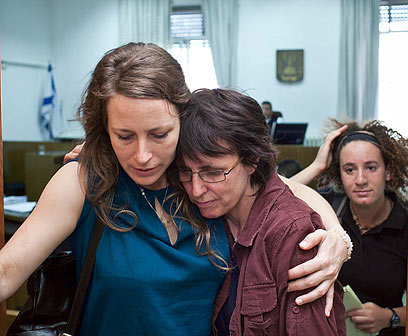 Wilson continued to recount the horrific event before the court. "They began to attack us. I fought back and managed to stab one of them, but then he pulled out a large knife. I saw Kristine trying to fight back. They held us for nearly a half and hour.

"I didn't understand whether they wanted to rape me or mug me. They removed my Star of David. I tried to convince them we weren’t Jewish. I told Kristine to fake an epilepsy attack and told them I was a tour guide and that the tour group would soon be back. They told me to take off my shoes and remove the laces. They tied my hands behind my back and put a muzzle on my mouth. I realized it was a kidnapping." Wilson told the court the defendants separated her from Luken. "They made us get down on our knees… I realized he was going to behead me. I heard Kristine screaming. They attacked us. I saw Kristine murdered before my eyes. She was yelling. I didn't want it to hurt me. I tried to keep silent. It was tough, because the beatings were hard, but I tried to play dead." The killers left the murder scene, but quickly returned after a few minutes. "I heard Kristine grunting. I wasn't sure I was alive. They came back to confirm we were dead. He stabbed my chest. A few minutes later I woke up in a different location but not far from where I was stabbed. I wanted to get back to the pathway so they could find my body. So they'll know it was murder. I managed to pick myself up and walked barefoot and bleeding with broken ribs, for nearly 15 minutes, until I found help."

Despite not having to testify due to sufficient evidence provided by police, the prosecutor insisted Wilson testify, noting that she had undergone a traumatic event and had prepared herself to speak before the court.

Wilson's friends were also present at the hearing as well as Luken's brother, who came to Israel especially for the trial.

Luken's body was discovered at a forest near Jerusalem in late December 2010, near the road connecting Beit Shemesh and Moshav Mata. A month later police said they uncovered a Palestinian cell responsible for the murder of the American tourist.

During the investigation, the cell members confessed to Luken's murder, as well as to the murder of Neta Sorek of Zichron Yaacov, whose body was found on February 2010 near the Beit Jamal Monastery outside Jerusalem.

An indictment was filed against four of the cell members, who were charged with murder, attempted murder and rape.