Turkish hackers post anti-Israel messages on dozens of websites, only to learn that sites belong to Palestinians

Turkish hackers attacked dozens of Israeli websites over the weekend, only to find out that the sites belonged to Palestinians.

The confusion was caused due to the fact that the Palestinian sites, which have a .ps web suffix, use Israeli web servers.

"The hackers left anti-Israel messages on 70 Palestinian sites," said Shai Blitzblau, the head of Maglan-Computer Warfare and Network Intelligence Labs. "Most of them discovered it when it was already too late. Only after they broke in and sabotaged the websites did they find out these were Palestinian sites."

The message, which featured an image of an Israeli soldier washing blood off of his hands, read: "Because you voted on behalf of Israel on Blue (Mavi) Marmara report… We suspended this site. You will apologize Netanyahu, you will apologize Israel." 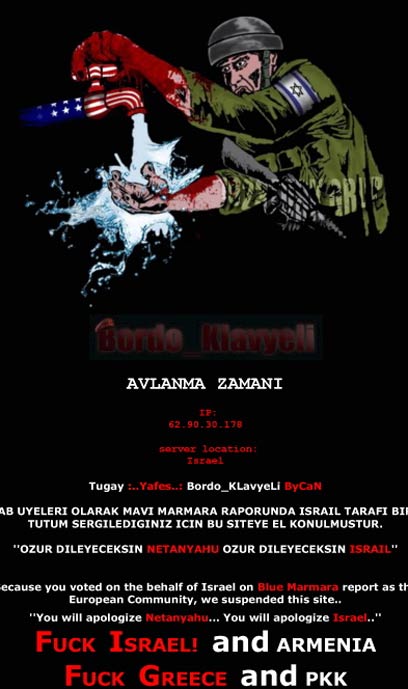 The criminal incident comes amidst a deepening diplomatic crisis between Turkey and Israel. Turkey recently expelled Israel's ambassador and downgraded diplomatic relations with Israel over Jerusalem's refusal to apologize for the events of last year's Gaza flotilla in which nine Turkish citizens were killed.

In recent weeks, Turkish Prime Minister Recep Tayyip Erdogan has made a number of speeches in which he expressed, among other things, the Turkish fleet's readiness to face Israel. On Sunday, Turkish Foreign Minister Ahmet Davutoglu announced that Ankara had interfered with Israel's request to open a NATO office in Brussels.

Eldad Beck contributed to the report