A car exploded outside a high school in the Turkish capital on Tuesday, igniting other vehicles, killing three and wounding 15 people, witnesses and officials said.

A deputy prime minister said the blast was caused by a car bomb. Other officials said a burning gas canister had been tossed onto a vehicle in downtown Ankara.

Reyhan Altintas, a neighborhood administrator, said she rushed outside after hearing a loud blast. It was followed by three other blasts, apparently caused by cars catching fire.

"I had never heard anything like it in my life," witness Adnan Yavuz said of the initial blast. "Then came another explosion and parts of a car dropped from the tree."

Deputy Prime Minister Bulent Arinc said officials had received information that a bomb was planted on the vehicle that exploded in the Kizilay district.

Gov. Alaaddin Yuksel and a local mayor, Bulent Tanik, said a witness told them that someone threw a burning gas canister onto the vehicles from a nearby building.

"That canister might have triggered the explosion of a liquefied petroleum gas tank on a vehicle," Tanik said. 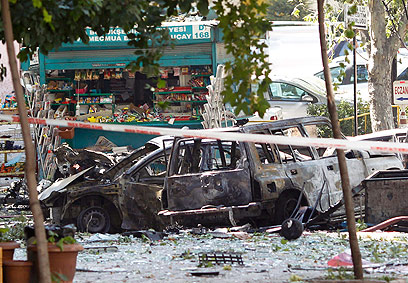 The wounded were initially treated in the school yard before medics rushed to the scene and whisked them away to hospitals, NTV television said.

Kurdish rebels fighting for autonomy in southeastern Turkey have lately escalated their attacks on Turkish targets. The rebels carried out deadly bomb attacks in Turkish cities in the past. Islamic and leftist militants were also behind some bombings in this NATO-member and US ally country.

Kurdish rebels were last blamed for a small bomb attack in the Mediterranean resort town of Kemer on Aug. 28 that injured 10 people, including four Swedish nationals.

Kurdish rebels have been fighting for autonomy in Turkey's mainly Kurdish southeast since 1984.

Turkish warplanes have bombed suspected rebel hideouts in northern Iraq last month in response to an escalation of attacks by the guerrillas. Turkey has not ruled out a cross-border offensive against Kurdish rebel bases in northern Iraq.