Leading Republican candidate takes Israel's side ahead of Palestinian UN bid. 'We would not be here today…if the Obama policy in the Middle East wasn't naive, arrogant, misguided and dangerous,' Rick Perry says

Speaking at a New York convention, the leading Republican president candidate said: "The Obama policy of moral equivalence, which gives equal standing to the grievances of Israelis and the Palestinians, including the orchestrators of terrorism, is a very dangerous insult. There is no middle ground between our allies and those who seek their destruction."

Perry added that the Palestinian decision to resort to a UN bid was a result of Obama's flawed policy.

"Simply put, we would not be here today at the precipice of such a dangerous move if the Obama policy in the Middle East wasn't naive, arrogant, misguided and dangerous," Perry said.

The Texas government slammed Obama's declaration that negotiations between Israel and the Palestinians must be based on the 1967 borders and endorsed settlement construction. He also hinted that under his future Administration America's embassy will be moved from Tel Aviv to Jerusalem. 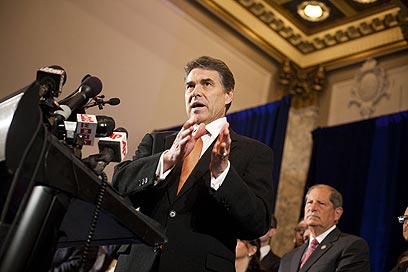 "It was wrong for this administration to suggest the 1967 borders should be the starting point for Israel-Palestinian negotiations," Perry said. "The Obama administration put Israel in a position of weakness, taking away their flexibility to offer concessions as part of the negotiations process."

Meanwhile, Palestinian Foreign Minister Riyad al-Maliki urged the Obama Administration to change its stance in accordance with the majority and support the Palestinian UN statehood bid and refrain from imposing a Security Council veto."

We are still unsure about how to act with regards to the US; we hope they will reconsider their stance," al-Maliki said during a meeting in New York with his colleague from Venezuela Nicolás Maduro.